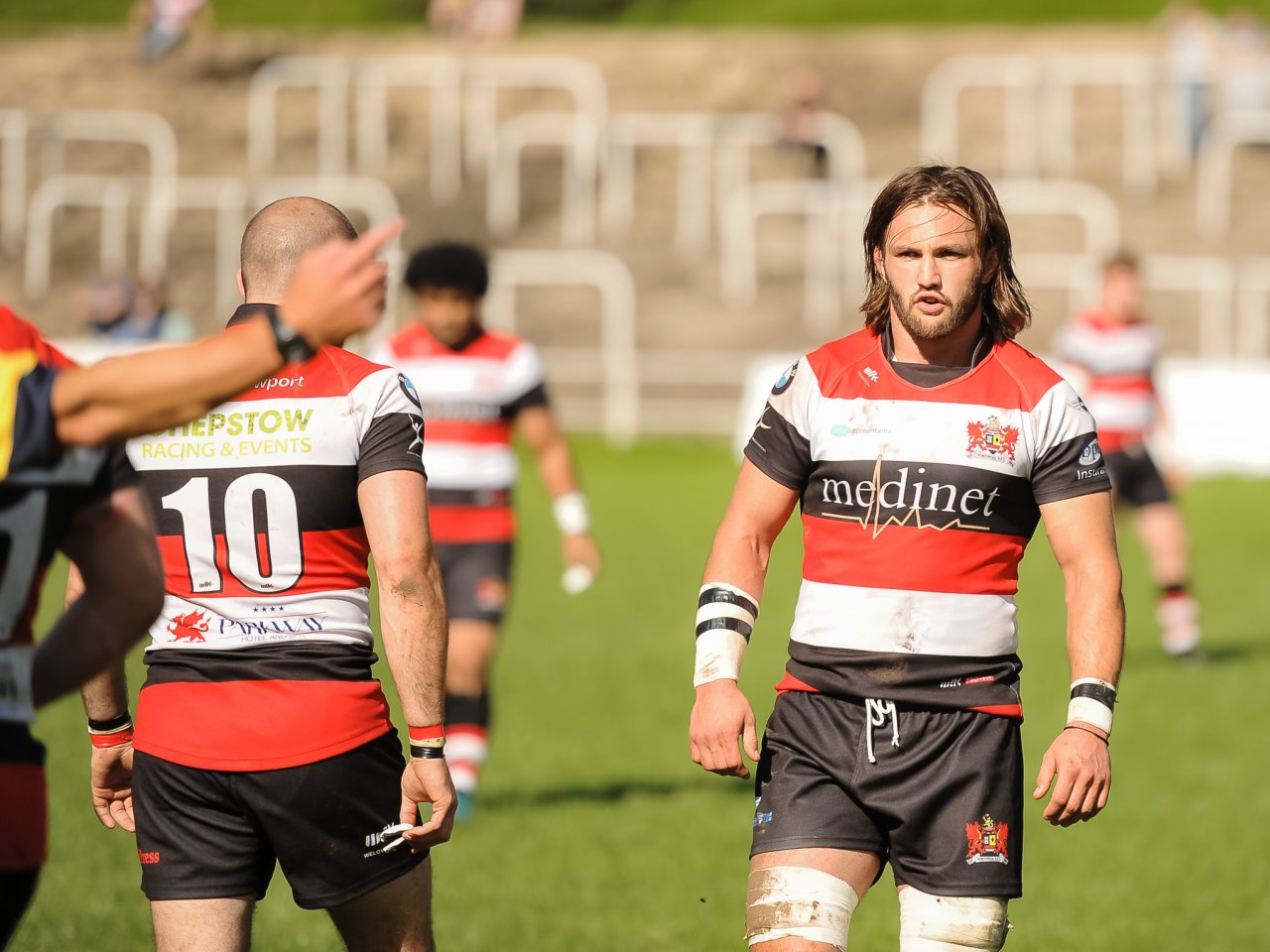 Pontypool welcomed Championship newcomers Newcastle Emlyn for their first ever visit to Pontypool Park on a fine but cold afternoon. Pontypool were looking for the double over their west Wales opponents having won 40-19 at Dol Wiber back in October. Pooler played in their changed strip of blue jerseys as Newcastle Emlyn’s colours are red and white hoops.

Newcastle Emlyn kicked off playing down the slope. The early exchanges were even but, in the eleventh minute Pooler were applying pressure in Emlyn’s 22 on Pooler’s right and the home forwards drove over the line with captain and hooker Ben Parry coming up with the ball. The conversion failed (5-0). Midway through the first half, Pooler were guilty of not releasing just outside their 22 near their right touchline and visiting left wing Daniel Davies slotted a good goal (5-3).

After half an hour’s play, Pontypool centre Sione Tu’ipulotu came out of a maul with the ball from inside his own half and raced up-field where he reached Emlyn’s 22 before offloading to the supporting Aaron Quick and the scrum half finished off the move with a try under the posts. Full back Clayton Gullis added the extras (12-3). However, Newcastle Emlyn hit back with a well-worked try of their own, scored under the posts by loose head prop Emrys Davies, converted by Daniel Davies (12-10). As the game went into injury time at the end of the first half, play was inside Pooler’s 22 and the home team entered a ruck from the side 15 metres in from their left and were penalised. The attempt at goal failed so the score at the break in a closely fought game was Pontypool 12 Newcastle Emlyn 10.

Within two minutes of the start of the second period, Emlyn were caught offside at a ruck in front of their posts on the 22 and Clayton Gullis extended the home advantage with a successful penalty kick (15-10). After 50 minutes, Pooler were penalised for driving in at a scrum 30 metres from their line in midfield but the attempt at goal went wide. Seven minutes later and Pontypool made their first replacement with wing Nathan Brooks making way for Dan Robinson. On the hour, Pontypool were applying pressure deep in Newcastle Emlyn’s 22. Pooler had a scrum near Emlyns’ line and the home pack drove the visiting eight back but they buckled under pressure with visiting loose head prop Emlyn Davies being shown the yellow card and the referee, Mr Jonathan Hardy of Tumble, ran under the posts and signalled a penalty try, which Clayton Gullis converted (22-10).

In the 67th minute Pontypool were penalised for side entry at a ruck 30 metres from their line in midfield and full back Shaun Leonard kicked the penalty to bring Emlyn back to within nine points of their hosts (22-13). After 75 minutes Ben Sparks was replaced by Lee Williams in the Pooler pack with Matthew Thomas dropping into the back row to accommodate Williams in the second row. Shortly after, Pontypool were penalised for holding on wide out on Emlyn’s right on Pooler’s 10 metre line but the long attempt at goal went wide. Going into injury time and Pontypool changed their props with Joe Popple and Garin Harris replacing Jamie Jeune and Ryan Harford respectively. In the sixth minute of injury time, Pooler were camped in Emlyn’s 22 and the pressure was finally rewarded with the all-important bonus-point try which scored in the right corner by the impressive Rob Nash. The difficult conversion failed but Pooler secured 5 precious match points. Final score Pontypool 27 Newcastle Emlyn 13.

This was a difficult game for Pooler. Credit to Newcaslte Emlyn who played with a good spirit and no little skill and made it tough for Pontypool but Pooler’s determination right at the end earned them the spoils and that vital fourth try. Pontypool now have a three-week break as the Six Nations start next weekend. The next scheduled league game is against Bridgend Athletic at the Brewery Field on Saturday 20 February, kick-off 2.30pm. The next home game is the following Saturday 27 February when Pooler welcome Beddau to Pontypool Park, kick-off 2.30pm.