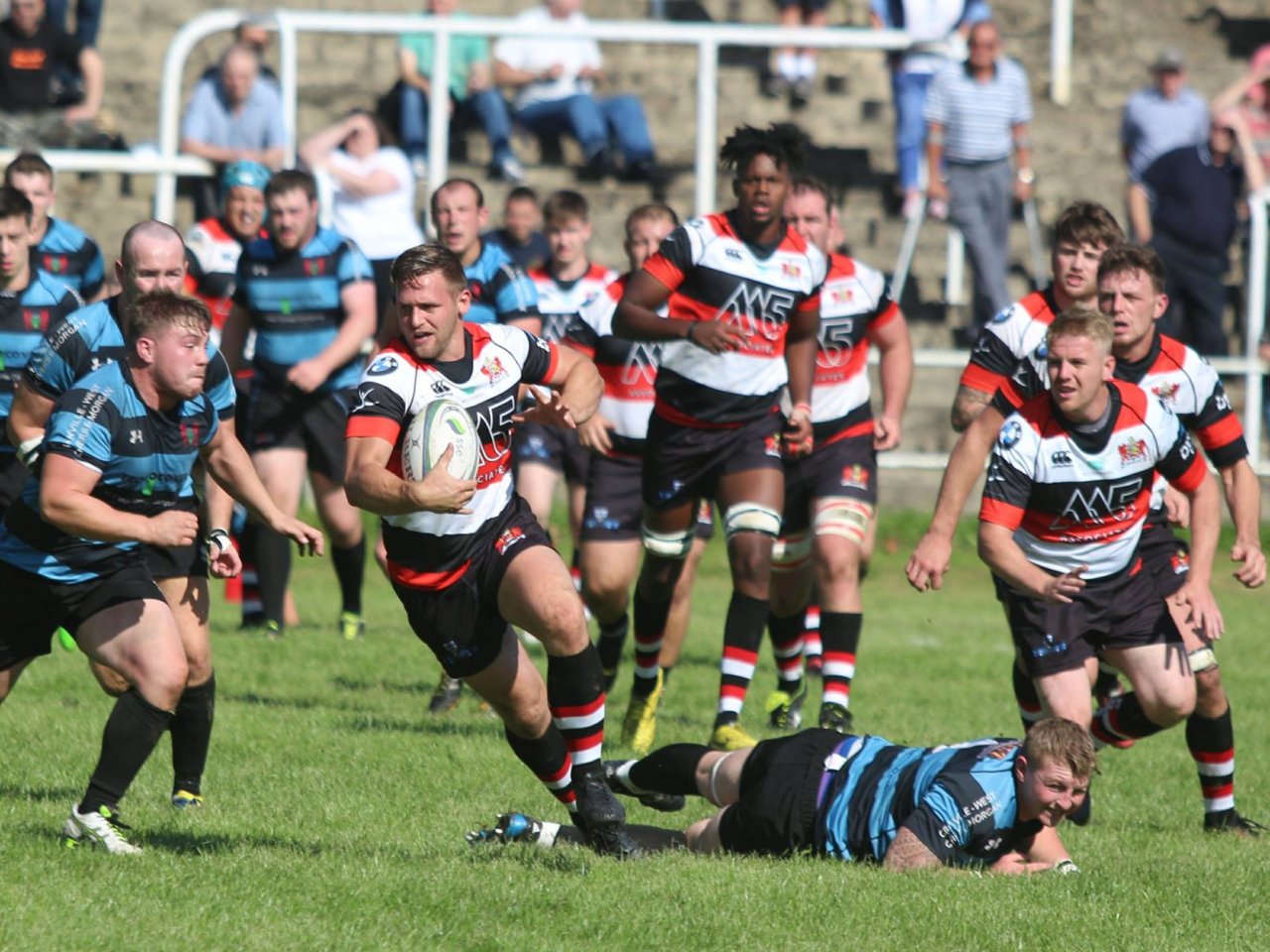 It wasn’t only the sun that was shining at picturesque Pontypool Park as Pontypool welcomed local rivals Newbridge in the WRU National Championship. Also shining was Pooler hooker Alex Watkins who bagged five tries in his team’s easy victory over their struggling opponents, writes Ray Ruddick.

Newbridge kicked off playing towards the scoreboard end of the ground on a very pleasant afternoon. The visitors took the lead in the sixth minute when Pooler were guilty of handling on the ground, 25 metres from their line, in front of the posts and outside half Simon Veale slotted the kick at goal (0-3). After 10 minutes Pooler won a lineout near the Newbridge goal line and the home pack drove their opponents over the whitewash with Alex Watkins scoring the first of his tries, converted by Matthew Jones (7-3). Six minutes later Pontypool won a penalty and kicked for the corner and from the ensuing lineout, the Pontypool eight again drove the Newbridge pack back and Watkins scored his second try. The conversion failed (12-3).

With a quarter-of-an-hour left of the first period, Pontypool were penalised for holding on between half way and their 10-metre line to the right of the posts but the attempt at goal went wide. Seven minutes later and Pontypool recycled quick ball. Outside half Matthew Jones threw a long ball out to Nathan Brooks and the right wing jinked past four defenders to score a try under the posts. The easy conversion was kicked by Matthew Jones (19-3). However, back came Newbridge and with four minutes to go before the break, Pooler made a mistake in midfield and the ball went loose in Newbridge's half. It was kicked ahead by visiting wing Mike Powell who managed to gather just before the Pooler goal line and scored a try to the right of the posts. The conversion was kicked by Simon Veale to make the score Pontypool 19 Newbridge 10 at the interval.

The second period was less than five minutes old when a long pass by Pooler on the half way line was intercepted by Luke Knight and the Newbridge centre sprinted 50 metres to score under the posts. Simon Veale added the extras to bring the visitors within two points of their hosts (19-17). Two minutes later Pooler hit back as Newbridge were guilty of not rolling away on their 22. Pontypool kicked to the right corner and from the lineout Alex Watkins benefited from another driving maul and touched down for his hat trick and Pooler’s bonus-point try. The conversion failed (24-17). With 15 minutes of the second half gone, Pontypool made a couple of changes as Matthew Jones made way for Tom Hancock who went to full back and Kieran Meek slotted in at outside half and prop Tomas Sparey was replaced by Jamie Jeune, who made his 200th league appearance for the club. Also centre Dan Robinson was making his 100th league appearance for Pooler. Two minutes later Rhys Dyer came on for scrum half Dan Brooks for the home side.

On the hour mark, Pontypool took a lineout on Newbridge’s throw five metres from the visitors’ goal line and the ball went right, across the Pooler backs. Centre Marc Thorley finished off the move with a try to the right of the posts and Kieran Meek converted (31-17). Four minutes later Newbridge flanker Luke Morgan was yellow carded for an infringement deep in the visitors’ 22. On 67 minutes and from another driving maul, Alex Watkins crossed for his fourth try, converted by Kieran Meek (38-17). With just over 10 minutes to go, impressive Pooler second row Max Williams was replaced by Josh Hayward and he was soon into the action. From yet another powerful driving maul he scored to the right of the posts. Kieran Meek added the conversion (45-17). Captain for the day prop Aaron Coundley was then replaced by Joe Popple. In injury time Pooler reached the half century with Watkins’s fifth try, finishing off another dominant driving maul. The conversion failed. Final score Pontypool 50 Newbridge 17.

It took Pontypool time to get into the game and when they realised that Newbridge had no answer to their driving mauls, there was only going to be one result. Having said that, credit must go to Newbridge who never gave up. Next Saturday Pontypool will make the trip to Abernant Park to take on Glynneath and their next home game will be the following Saturday (1st October) when Dunvant will be the visitors to Pontypool Park. Both matches kick-off at 2.30pm.