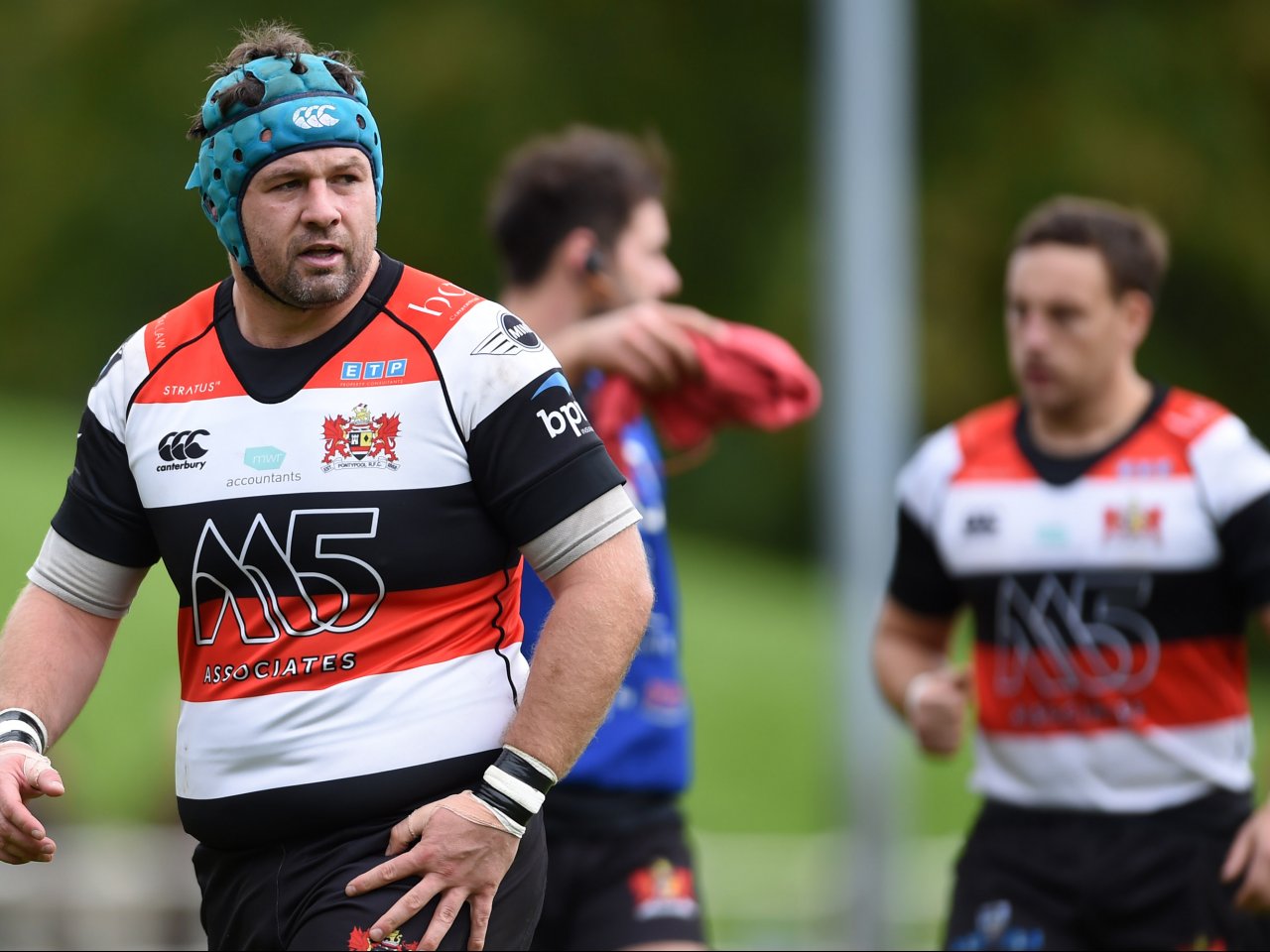 Pontypool paid their first-ever visit to Hawthorn Recreation Ground on Saturday and were given a very good test by Rhydyfelin before the visitors pulled away towards the end of the game, writes Ray Ruddick.

Pontypool kicked off attacking the leisure centre end of the ground on a fine and sunny afternoon. Pooler made a good start and in the fourth minute, Rhydyfelin were penalised for going over the top inside their 22. Pooler kicked for the left corner and from the ensuing lineout, hooker Alex Watkins scored a try, following a powerful forward drive. Outside half Kieran Meek added the conversion (7-0). Three minutes later the visitors were on the attack in the home 22 and Kieran Meek chipped ahead towards the left corner. However Rhydyfelin’s defence failed to gather and centre Clayton Gullis picked up the loose ball and scored a try, 15 metres in. Kieran Meek slotted the conversion (14-0). Rhydyfelin hit back when, in the tenth minute, home scrum half Garyn Lucas caught the Pooler defence off guard and scored a try near the left corner. The conversion was kicked by full back David Gratton (14-7).

In the 19th minute tight head prop Ollie Drake took a knock and was replaced by Craig Price. Just on the half hour mark Rhydyfelin were penalised for not rolling away on their 10-metre line. The champions kicked for the left corner and from another powerful drive by the Pooler pack, flanker Mike Herbert scored an unconverted try wide out (19-7). Just before half time, Pooler were awarded a penalty in front of the home side’s posts and flanker Jordan Williams, in an attempt to take a quick tap, injured his leg and had to be helped off the field. Callum Davies took the field as a replacement. Half time score – Rhydyfelin 7 Pontypool 19.

After 13 minutes of the second period, Pontypool’s debutant loose head prop Lewis Rosser received a bump and was replaced by Ben Parry. There were then uncontested scrums for the rest of the match. Just before an hour’s play Rhydyfelin’s loose head prop Dale Green threw a punch at a lineout on Pooler’s 22 in front of the referee and the official, Mr Justin Evans of Aberdare, showed Green a straight red card. In the 66th minute Pontypool were on the attack inside the home 22. They recycled and the ball went right with fly half Kieran Meek gliding over for the bonus-point try to the right of the posts and he duly converted (26-7). Eight minutes later Pooler made a couple of changes in the backs as right wing Jordan Thomas made way for Lewis Prothero and Martin Luckwell replaced Aaron Quick at scrum half.

In the 79th minute Pooler’s impressive Clayton Gullis made a lovely break from inside his own half and made 40 metres before passing inside to Martin Luckwell. Luckwell then passed inside again to the supporting Meek who touched down under the posts and he converted his try (33-7). In the fourth minute of injury time and with the final move of the game, some lovely handling by both forwards and backs resulted in a well-worked try under the posts by captain-for-the-day and flanker Brendan Lampitt. Kieran Meek landed his fifth conversion of the game and a match total of 20 points. Final score – Rhydyfelin 7 Pontypool 40.

It wasn’t a brilliant performance by Pontypool by any means and Rhydyfelin, to their credit, made Pooler work particularly hard for their win. However, it was another bonus-point win which takes Pontypool over the 100-point mark to 103 league points out of a possible 105, and 21 straight wins – a superb record.

Next Saturday will be the big test for Pontypool when they make the long journey west to the Lewis Lloyd Ground to face Narberth in a mouth-watering top-of-the-table clash, kick-off 2.30pm. This will be Pontypool’s final match of the season so can they finish an outstanding season with a win and end the campaign winning all 22 games? Whatever the result, Pontypool will be presented with the WRU National Championship trophy at Narberth.