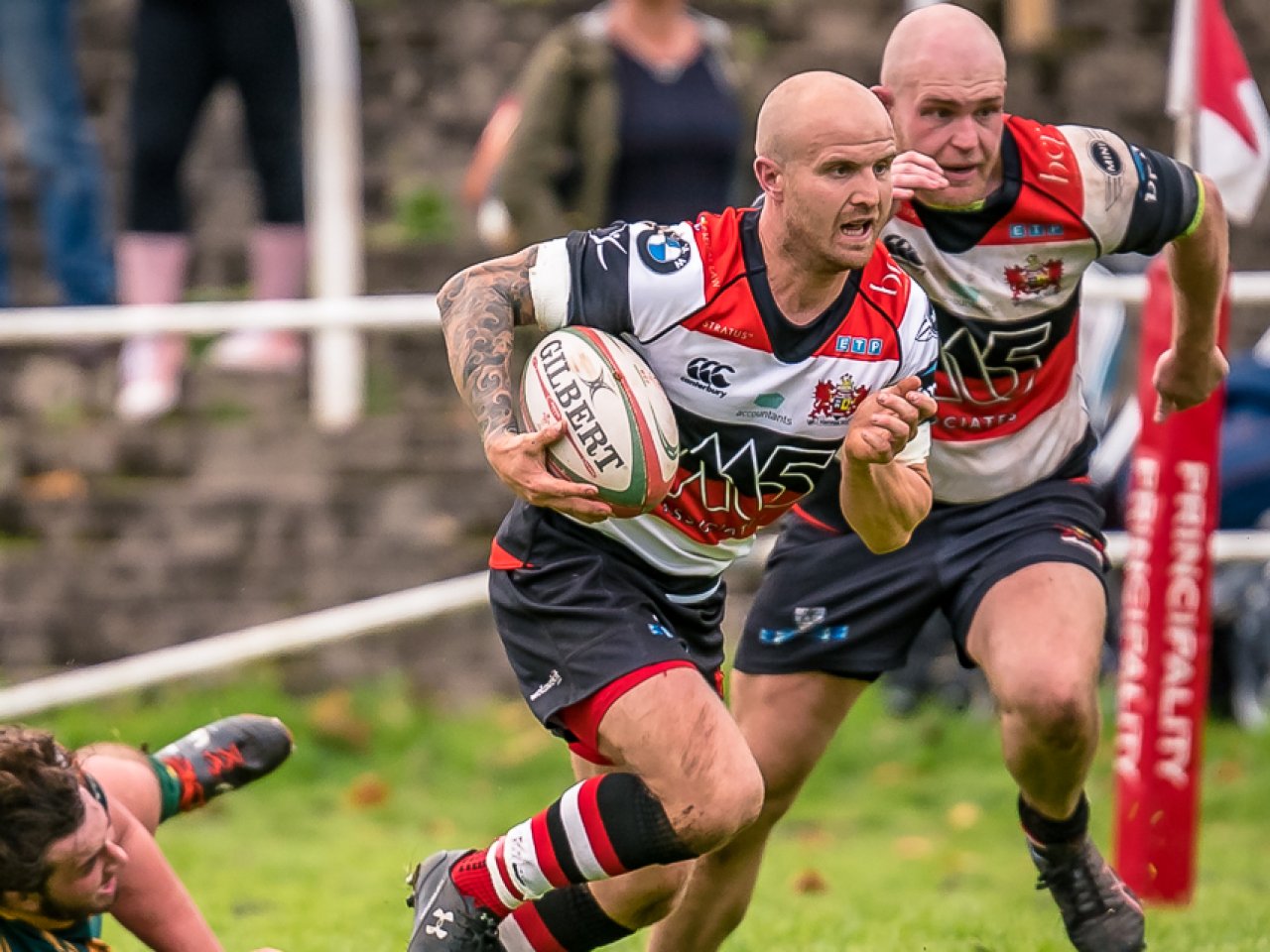 Pontypool scored six tries in overcoming a tenacious and committed Tata Steel side in the top-of-the-table clash in the WRU National Championship at Pontypool Park on Saturday, writes Ray Ruddick.

Pontypool kicked off attacking the bandstand end of the ground. The pitch was very heavy after the significant snowfall followed by persistent rain over the previous ten days which made the playing conditions difficult. In the 10th minute Pooler kicked ahead from the half way line but the home player was taken out late so the penalty was awarded where the ball landed – just outside the visitors’ 22 in midfield. Outside half Matthew Jones made no mistake with his shot at goal to put his side into an early lead (3-0). Seven minutes later Pontypool hooker Jamie Jeune took a knock to the leg and was replaced by Ben Parry. In the 18th minute Tata Steel were in possession in their 22 but the ball went loose. Pooler centre Kieran Meek kicked ahead and won the race to the touchdown, 15 metres in from the left corner. The conversion attempt went across the face of the posts (8-0).

With 15 minutes to go to the interval, Tata’s impressive 25-metre driving maul was rewarded with a try near the posts by No 8 Matthew Llewellyn, converted by outside half Callum Bricknell (8-7). On the half hour mark Pooler were caught offside 5 metres inside their half and 10 metres in from touch on Tata’s left, but the attempt at goal hit the upright and Pooler cleared. In the 34th minute Pooler left wing Jordan Thomas was in possession and kicked ahead but The Saints defender knocked on near his 22. Craig Attwell gathered and offloaded to Dan Robinson and, he in turn passed back inside to Attwell for the flanker to score a try 5 metres in from the left corner. This score was superbly converted by Matthew Jones (15-7). On the stroke of half time home second row Jordan Williams made a break in midfield and passed to the supporting Ben Parry. The ball was recycled and went right. It reached right wing Lewis Prothero who made about 20 metres which took play to near the visitors’ line and he managed to get has pass to Matthew Jones who crossed near the right corner for an unconverted try. Half time – Pontypool 20 Tata Steel 7.

In the 11th minute of the second period Pooler scored their bonus-point try through full back Clayton Gullis. Pontypool were applying pressure on The Saints’ defence and, after several drives near the visitors’ line, the ball went right and Gullis came into the line at speed and crossed for a try which was converted by Matthew Jones (27-7). Five minutes later the ball went loose in midfield near the half way line. Craig Attwell picked up and passed to Matthew Jones who then drew a defender and made a long pass to Lewis Prothero. The winger made 20 metres and Clayton Gullis looped outside Prothero to score his second try of the afternoon in the right corner. Matthew Jones slotted a fine conversion (34-7).

In the 64th minute Pontypool made some changes with Martin Luckwell replacing scrum half Aaron Quick, Jordan Williams made way for Callum Davies in the pack and Owen Williams came on for Dan Robinson with Gullis going to centre, Thomas to full back and Williams to left wing. 10 minutes later Pooler tight head prop Ollie Drake was replaced by Josh Harris who was making his debut. Five minutes from time Owen Williams made a great break from deep inside his half and passed to Martin Luckwell. He made ground and offloaded to Craig Attwell on the burst and he sprinted 30 metres to score his second try of the game. Matthew Jones added the extras (41-7). However it was Tata who scored the game’s final try two minutes into injury time when flanker Ryan Davies crossed, 10 metres in from the left corner, converted by Callum Bricknell. Final score – Pontypool 41 Tata Steel 14.

This was another good all-round team performance by Pontypool to record their 16th victory in as many games. Their next league game is on Saturday 24 March when they travel to Cyncoed to take on the students of Cardiff Metropolitan University (kick-off 2.30pm) and, if Pooler can secure a victory there, they will successfully defend their Championship crown they won last season.

However, before their trip to the capital city, Pontypool have an important match at The Wern on Tuesday 20 March when the make the journey to Merthyr to take on last season’s Premiership champions in the eagerly awaited quarter final of the WRU National Cup, kick-off 7.15pm.