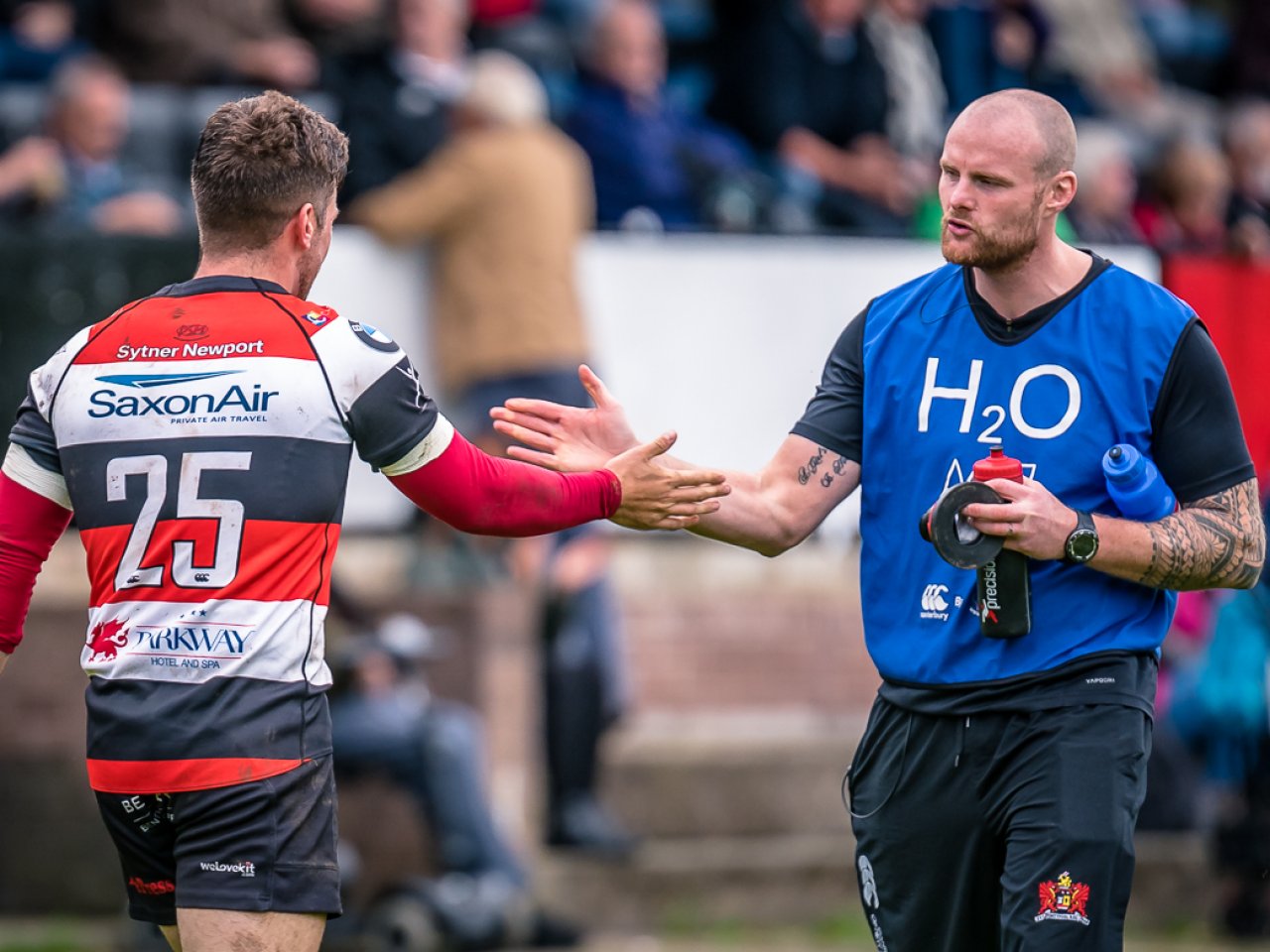 Matches between near neighbours and local rivals Newbridge and Pontypool have always been hard-fought, physical, passionate encounters and the match at the Welfare Ground on Easter Saturday afternoon, in front of a sizeable crowd, was another emotionally-charged game, writes Ray Ruddick. There was nothing to choose between the two sides in the first 10 minutes with Newbridge going into a very early lead, but in the 11th minute referee Mr Justin Williams of Llangennech has no option but to send off home full back Lewis Hudd for head-butting his opposite number Jordan Thomas, so from then on it was an uphill struggle for the home side against newly-crowned WRU National Championship champions Pontypool.

Newbridge kicked off defending the school end of the ground on a fine but overcast afternoon and on a heavy pitch. In the first minute Pontypool were penalised for going over the top 30 metres from their line, slightly to the left of the posts and home outside half Eamonn Reese slotted the kick (0-3). Ten minutes later it was Lewis Hudd’s foul play which led to a fight involving most of the players and eventually, when the players had calmed down, he received a red card. In the 18th minute Newbridge were penalised for offside deep inside their 22. The visitors took a scrum and from their powerful drive, the referee awarded a penalty try (7-3).

In the 26th minute Pooler were caught offside near their 22 in front of the posts and Eamonn Reese landed the goal (7-6). Seven minutes later Pontypool were penalised for playing the ball on the ground on the half way line to the left of the posts and Eamonn Reese kicked a superb goal to put the home side back in front (7-9). In the 36th minute Pontypool took play into Newbridge’s 22. They recycled the ball and loose head prop Aaron Coundley was on hand to cross for a try to the left of the uprights. Outside half Matthew Jones converted (14-9). In the third minute of injury time at the end of the first half Pontypool’s hard-working flanker Mike Herbert made a great break down the middle of the field. The ball was taken on by his fellow flanker and captain Rob Nash who then offloaded to Brendan Lampitt. The second row just managed to get his pass to Clayton Gullis and the centre crossed for an unconverted try in the right corner. Half time score – Newbridge 9 Pontypool 19.

In the 10th minute of the second period Newbridge put together a good move, giving the ball air, and centre Paul King crossed for a well-worked try in the left corner. The conversion failed (19-14). Pontypool then made some changes with Joel Mahoney replacing Matthew Jones, who had earlier taken a couple of knocks, Ben Sparks came on for second row Richard East and tight head prop Ollie Drake made way for Ben Parry. Uncontested scrums were then introduced and this was the case for the remainder of the match. In the 53rd minute Pontypool were applying pressure inside Newbridge’s 22. Ben Sparks made a good break but was tackled just short of the goal line. The ball was recycled and Kieran Meek, who had gone to outside half when Matthew Jones left the field and Joel Mahoney slotted in at centre, scored the bonus-point try to the right of the posts. Meek also added the extras (26-14).

On the hour mark Pooler scrum half Aaron Quick made way for Martin Luckwell. Two minutes later the visitors were again on the attack with a good run by No 8 Jordan Williams. He passed to Rob Nash who then offloaded to Kieran Meek. Meek made the scoring pass to Ben Sparks who crossed for a try near the posts. Meek duly converted (33-14). Aaron Coundley was then replaced by Craig Price. With twelve minutes remaining, Pooler won a lineout on the home 22 on their right with Ben Sparks taking the short ball. He then emerged from a maul galloping over for another five-pointer to the right of the posts. Kieran Meek slotted the conversion (40-14).

In the 72nd minute Pooler were once again on the offensive and Jordan Thomas took the ball at speed and scored a try near the uprights. Kieran Meek added the extras (47-14). Four minutes later Newbridge were in possession between their 22 and 10-metre line but a pass was intercepted by Kieran Meek who sprinted 30 metres to touchdown near the posts and he kicked the conversion (54-14). In the final minute Martin Luckwell passed to Kieran Meek from a passive scrum near the home 22, Meek offloaded to Clayton Gullis and Meek wrapped around to take the return pass and made a lovely break which cut through the Newbridge defence. Meek passed out to Joel Mahoney and the young replacement centre scored the game’s final try in the left corner. The conversion was unsuccessful. Final score – Newbirdge 14 Pontypool 59.

Pontypool ran away with the contest in the last 27 minutes, scoring 40 unanswered points against a gritty and determined Newbridge side. This is Pooler’s highest score and biggest winning margin over Newbridge. After an explosive start, the game eventually settled down and Pooler scored some good tries. Outstanding once again for Pontypool was flanker Mike Herbert who carried on where he left off last Saturday at Cyncoed – he was terrific in both games.

Pontypool’s final home game of the season will be on Saturday 7 April when Newcastle Emlyn make the long journey to Pontypool Park, kick-off at 2.30pm. Then on Wednesday 11 April Pooler travel to Tennant Park to take on Skewen in a re-arranged game, kick-off 7.15pm.