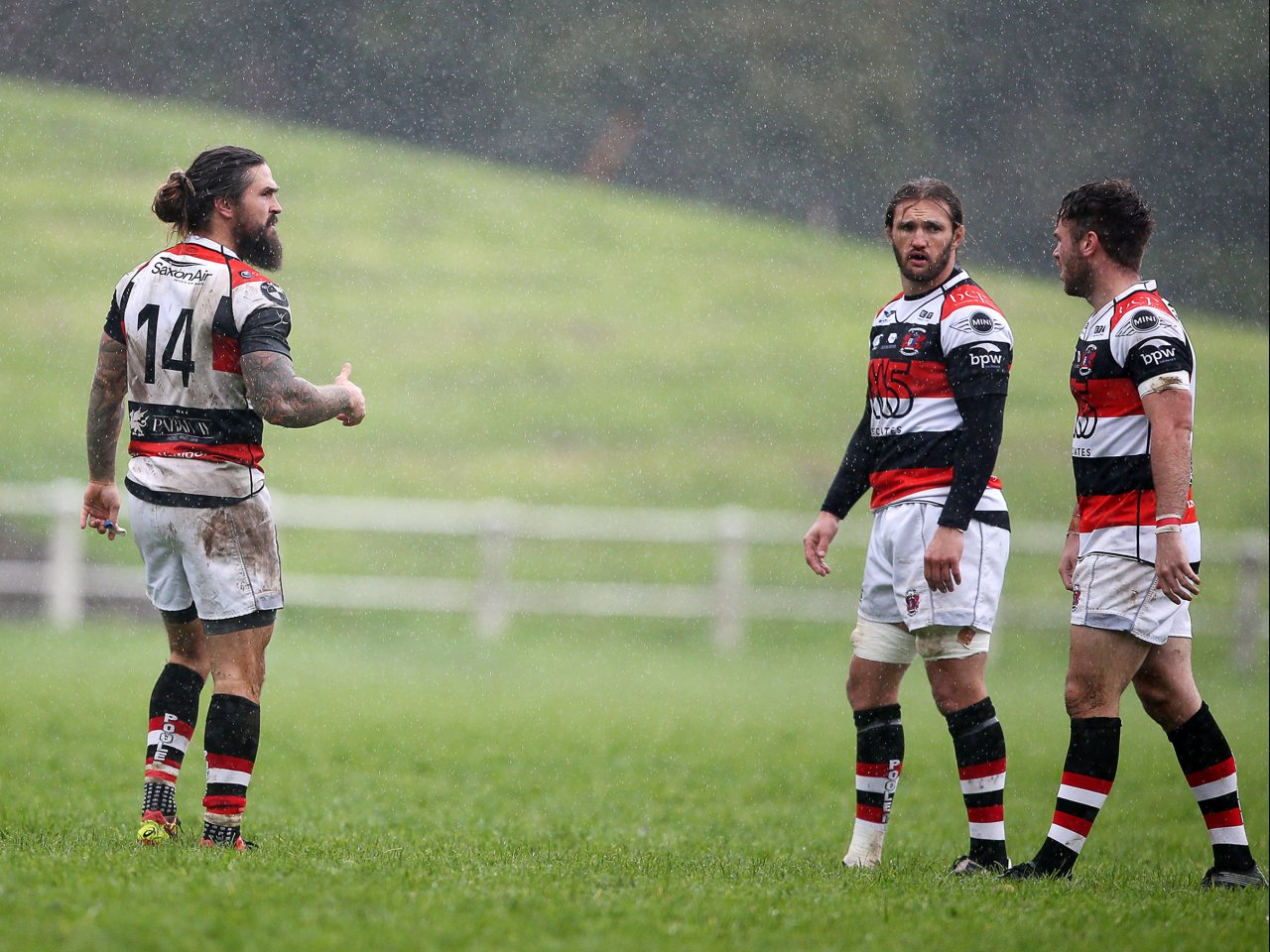 Pontypool welcomed Beddau to a very wet and cold Pontypool Park on Saturday for a WRU National Championship game, writes Ray Ruddick. Rain had fallen during the morning of the match and the downpour continued throughout the game, making the sodden pitch very heavy and conditions extremely difficult. It was thanks to the Pontypool stewards and volunteers that the pitch was made payable. Pooler prevailed having played good rugby and some excellent handling led to several well-worked tries.

Pontypool kicked off attacking the bandstand end of the ground. The home side gave away three penalties in as many minutes at the start of the game. The third of which resulted in a shot at goal from in front of the posts on the 22 and outside half Hywel Chatham put the visitors into an early lead (0-3). In the 9th minute Pooler second row Curtis Gregory won off the top ball at a lineout on Beddau’s 10-metre line on the bank side. The ball went from scrum half Martin Luckwell to outside half Matthew Lewis and then to centre Kieran Meek who gave a short pass to fellow centre Joel Mahoney on the burst and the youngster sprinted 35 metres to score a try under the posts. Matthew Lewis slotted the conversion (7-3).

In the 24th minute Pooler had a scrum feed near the Beddau goal line. Luckwell passed to Lewis and he offloaded to Kieran Meek on the burst with the centre gliding over for a try under the posts. Matthew Lewis added the extras (14-3). Three minutes before the interval Pooler were caught offside, 30 metres from their goal line to the left of the uprights and Hywel Chatham kicked his second penalty of the afternoon. Half time score – Pontypool14 Beddau 6.

In the second minute of the second half Beddau second row Ben White was yellow-carded for back-chatting the referee. Five minutes later home loose head prop Aaron Coundley barged his way over the line after Pooler tested the Beddau defence. Matthew Lewis kicked the conversion (21-6). A minute later Pontypool No 8 Ben Sparks burst out of a maul near the home 10-metre line. He made ground and passed to hooker Darren Hughes who then put flanker Mike Herbert in the clear. He ran 30 metres only to be brought down just short of the goal line. However he managed to get his pass to the supporting Martin Luckwell who fell over the line for the bonus-points try. The conversion failed (26-6).

In the 54th minute Pooler made a couple of changes when Clayton Gullis came on for Kieran Meek in the centre and Ollie Drake made way for Craig Price at tight head prop. Twelve minutes later play was on the Beddau 10-metre line when Darren Hughes took the ball and made ground. He offloaded to Aaron Coundley who made more ground and passed to Jordan Thomas for the left wing to score a try near the posts. Matthew Lewis added the extra 2 points (33-6).

The next minute Jordan Thomas gave a neat pass behind him to Joel Mahoney which put the centre clear on the left and he ran 50 metres to score a try under the posts. Matthew Lewis slotted the conversion (40-6). Pooler then brought on their last three replacements with Ben Parry taking over from Darren Hughes, Ben Sparks made way for Cameron Watson-Boycott and Aaron Quick replaced Martin Luckwell.

In the 71st minute the slippery ball went loose near the half way line with the old fashioned ‘kick and rush’ ensued. Pooler eventually secured possession and replacement Cameron Watson-Boycott scored an unconverted try to the left of the sticks. Final score – Pontypool 45 Beddau 6.

Well done to all the players of both sides and the referee, Stuart Kibble of Cardiff, for their efforts in producing an entertaining game in the most trying of conditions. This 12th consecutive victory of the season stretches Pooler’s lead at the top of the Championship to 14 points with a game in hand over second-placed Ystrad Rhondda.

On Saturday Pontypool will make the short trip to the Welfare Ground to take on traditional rivals and near neighbours Newbridge in what promises to be an absorbing local derby, kick off 2.30pm.