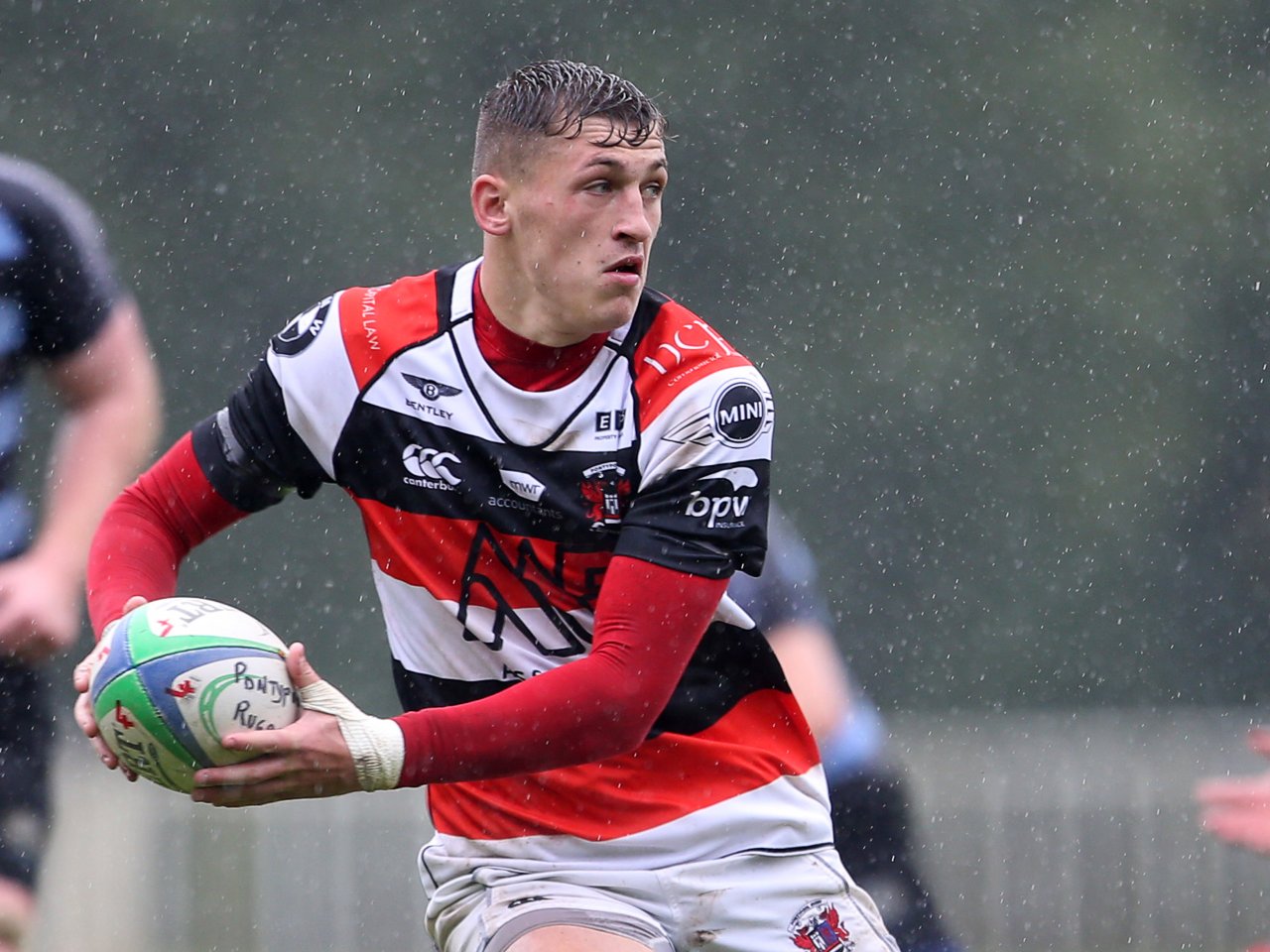 Pontypool gave it their all but it wasn’t quite enough as Llanelli ran out worthy winners in the Principality Premiership play-off on a dry and pleasant Friday evening at Aberavon’s Talbot Athletic Ground, writes Ray Ruddick. Even though Llanelli finished 12th out of 16 in the Principality Premiership this season, with the four teams below them relegated, and Pontypool winning the WRU National Championship for the past three seasons, with 65 victories out of 66 games, and could not get automatic promotion as the Premiership was ring fenced for those three years, the WRU still saw fit that these two famous clubs had to play-off with the winners playing in the Premiership next season and the losers in the Championship.

Pontypool kicked off attacking the scoreboard end of the ground. In the fifth minute Llanelli’s second row Chris Long was yellow carded for a deliberate knock as Pooler were looking to attack near their 10-metre line. In the 18th minute Llanelli were penalised at a scrum, 15 metres in on Pooler’s right near Llanelli’s 10-metre line but the attempt at goal failed. In the 32nd minute Llanelli were penalised deep inside their 22 at a ruck to the right of the posts, and Llanelli’s full back Kalum Evans was also sin binned for two offences in the same move. Pontypool centre Kieran Meek slotted the kick at goal to score the first points of this tense first half (3-0).

In the second minute of injury time Llanelli were penalised inside their 22 near the 15-metre line on Pooler’s right and Meek doubled the Gwent side’s lead with a successful attempt at goal (6-0). However, five minutes later and on the stoke of half time, Llanelli won a lineout 15 metres from Pontypool’s goal line and the Llanelli pack (and others) powerfully drove their opponents back over their line and flanker Taylor Davies scored a try in the left corner with wing and Welsh international Tom Prydie slotting a fine conversion to put the West Walians ahead by a point at the interval. Half time score – Llanelli 7 Pontypool 6.

In the eighth minute of the second period Llanelli were penalised for offside near their goal line on Pooler’s right and Kieran Meek’s attempt at goal was a successful one to put his side back in front (9-7). Four minutes later Pooler were guilty of dropping the scrum just inside their half in midfield and Tom Prydie kicked a fine goal to restore Llanelli’s one point advantage (9-10). Pontypool then made a double substitution with scrum half Martin Luckwell making way for Aaron Quick and second row Danny Hodge was replaced by Mike Herbert who slotted into the back row and Ben Sparks moved up from No 8 to second row.

After 63 minutes Pontypool were at fault at a retreating scrum near their 10 metre line and Prydie extended Llanelli’s lead with another successful shot at goal (9-13). Three minutes later Pooler made further changes when Corey Hewlett replaced loose head prop Jamie Jeune and Ollie Drake made way for Craig Price on the other side of the front row. A minute later Llanelli were on the attack outside Pooler’s 22 and chipped ahead with replacement Ryan Conbeer, with some good foot work, managed to get the touchdown. Prydie added the extras (9-20).

Pooler made another change with outside half Matthew Lewis being replaced by Joel Mahoney. Meek moved to outside half and Mahoney went to his usual position of centre. Then Pooler’s captain Rob Nash was replaced by Brendan Lampitt, who went into the second row and Ben Sparks went back to No 8. In the 72nd minute Llanelli sealed their win with a try by replacement Lee Rees as he finished off a move that started from deep after a fine break by full back Kalum Evans. The conversion was kicked by Tom Prydie (9-27). Pooler replacement Corey Hewlett took a knock to his arm and Jamie Jeune re-took the field and Marcus Jones came on for left wing Jordan Thomas. In the 74th minute Ben Parry took over from Darren Hughes in the middle of the Pooler front row.

Pontypool were not finished, however, as in the fifth minute of injury time at the end of the game, they were on the attack deep inside Llanelli’s 22 and hard-working flanker Scott Matthews managed to get the ball down on the line under the posts to score a try, as referee Nigel Owens referred the matter to the Television Match Official Jon Mason and he confirmed that a try had been scored. Kieran Meek added the two points but, in the end, it was too little too late and Llanelli deserved their victory. Final score – Llanelli 27 Pontypool 16.

The game was superbly controlled by World Cup Final referee Nigel Owens, still the best referee in world rugby. He was very well supported by his assistants Adam Jones and Richard Brace and the TMO Jon Mason. Congratulations gentlemen and many thanks for your most valuable contribution to our great sport.

Llanelli were the better side and fully deserved their victory so very well done to them. Despite this defeat, the Pontypool playing squad and coaches can be very proud of their achievements, not only this season, but the last three seasons, having been beaten only once in the league so many congratulations to everyone concerned – a superb record. They need to have some time off during the summer, pick themselves up, dust themselves down and re-group ready to defend their Championship crown next season.