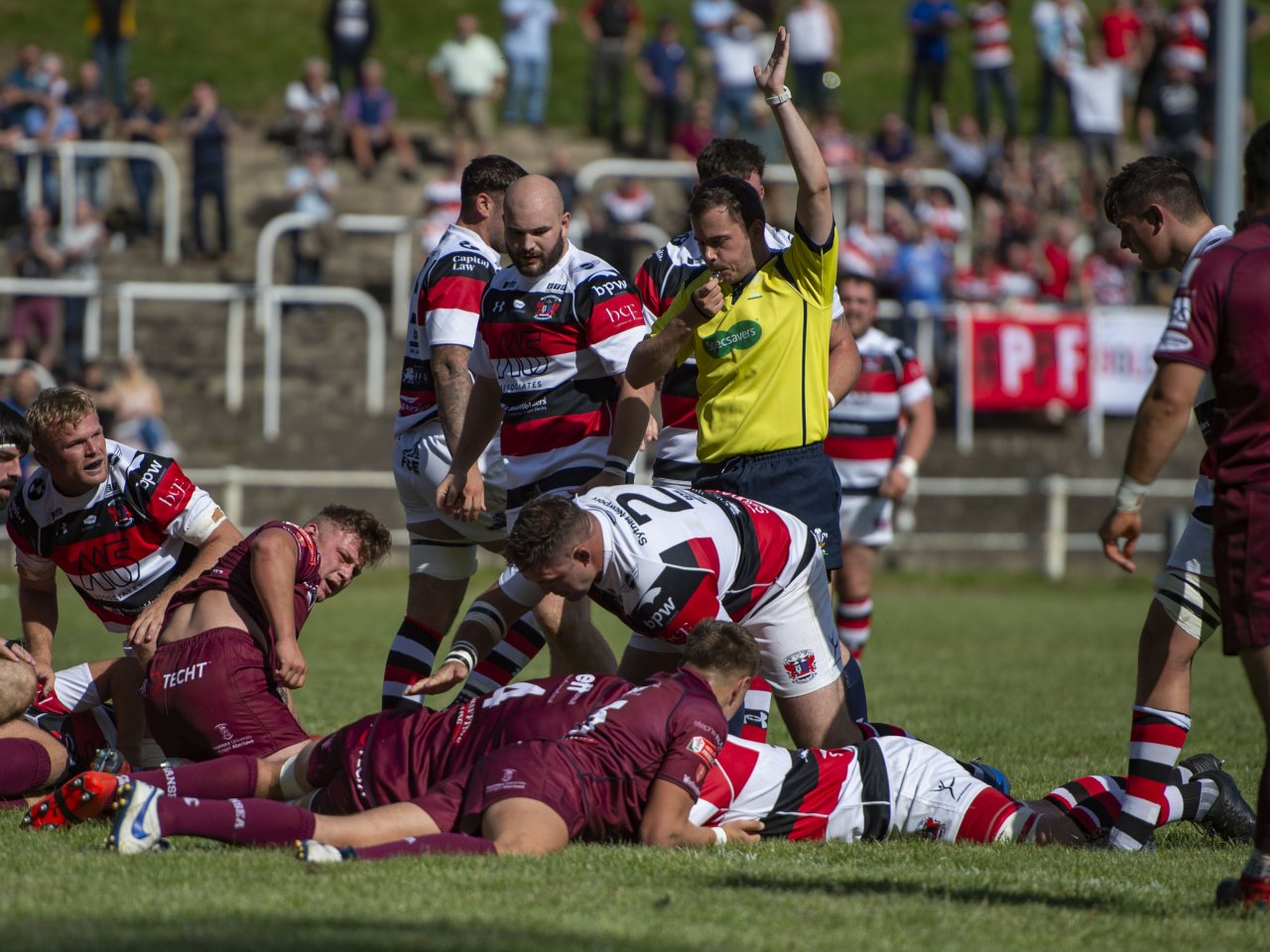 After the success over Premiership club Swansea in the Specsavers WRU National Cup last Saturday, Pontypool returned to league action this Saturday when they made the journey to Ynysydarren Park to take on newly promoted Ystalyfera in the Specsavers WRU National Championship, writes Ray Ruddick. The two teams had met only once before when Pontypool hosted Ystalyfera in the first round of the WRU Cup back in November 1977 as Pooler overwhelmed their visitors 86-6.

It was a very pleasant, sunny and warm afternoon in the upper Swansea valley as Pontypool kicked off defending the clubhouse end of the ground. In the 4th minute Ystalyfera were penalised near their 22. Pooler kicked for the right corner and from the ensuing driving lineout, hooker Lewis Ball scored a try wide out, which was converted by outside half Kieran Meek with a fine kick (7-0). Four minutes later Pooler gave away a penalty at a scrum on their 10-metre line in midfield and home outside half Steffan Castle made no mistake with his attempt at goal (7-3).

Midway through the first half Ystalyfera’s tight head prop Gareth Jones was yellow-carded at a scrum deep inside ‘Fera’s 22. Pooler kicked for the left corner and, from another driving lineout, hard-working flanker Adam Stratton scored a try. Kieran Meek added the extras (14-3). In the 32nd minute, visiting centre Pat Lewis was sin-binned for a high tackle near the Pooler line, close to the posts. Ystalyfera elected to take a scrum and Pooler received another yellow when loose head prop and captain-for-the-day Aaron Coundley was adjudged to have taken down the scrum, and had 10 minutes in the bn. After some deliberation replacement hooker Darren Hughes came on for second row Danny Hodge to cover the front row but because there was no specialist loose head prop on the bench (Craig Price who came on later in the game is a tight head), passive scrums were called by the referee but returned to competitive scrums when Coundley’s 10 minutes were up. When play eventually resumed, ‘Fera spun the ball wide from the scrum and left wing Josh Jarrett squeezed in the corner for an unconverted try. Half time score – Ystalyfera 8 Pontypool 14.

Early in the second period Ben Sparks was replaced by Rhys Clarke at blind side flanker for the visitors. In the 45th minute the Swansea Valley men were penalised for wheeling a scrum inside their 22. Pontypool kicked for the left corner and exerted pressure with another driving maul. However the maul collapsed and home No 8 Steffan Jones was singled out as the player responsible and was shown the yellow card. In the 58th minute Pontypool had an attacking scrum feed in their right corner and the scrum wheeled again. The referee deemed Ystalyfera responsible and ran between the posts to award Pontypool a penalty try (21-8).

In the 63rd minute Darren Hughes replaced Lewis Ball in the middle of the Pooler front row. A minute later Pooler went on the attack with a lovely break by centre Amosa Nove. He offloaded to fellow centre Pat Lewis who glided over under the posts for the bonus-point try which Kieran Meek converted (28-8). Then in the 68th minute Kieran Meek fielded a clearance kick between the half way line and the home 10-metre line. He looked up at the posts and dropped an audacious goal with a well-struck kick from fully 45 metres (31-8).

Pooler then made some changes in personnel with Martin Luckwell taking over from debut-making Owain Leonard at scrum half and left wing Jordan Thomas made way for Matthew Lewis. Matthew Lewis went to outside half, Kieran Meek to centre and Pat Lewis yo left wing. In the 72nd minute Pontypool made their final change with Craig Price replacing Scott Evans at tight head prop.

Four minutes later Pontypool No 8 Ieuan Jones was sin-binned for a skirmish near ‘Fera’s 22. In the fourth minute of injury time, Pontypool had a scrum near the home line and pushed the ‘Fera pack back but the scrum fragmented and referee Dai Cambourne again awarded a penalty try to Pontypool (38-8). In the tenth minute of time added on, Ystalyfera deservedly scored a try after right wing Luc Caines gathered a crosskick and touched down in the corner. The conversion was kicked by Steffan Castle which was the final action of an enthralling encounter. Final score – Ystalyfera 15 Pontypool 38.

Ystalyfera were difficult to break down and caused Pontypool problems throughout the game. The home side should be proud of their performance as they gave it their all and, if they perform like this, will be tough to beat on their home ground. As for Pontypool, it was another bonus-point victory but not before having to work hard to overcome a determined Ystalyfera side. This victory takes Pontypool a point clear of the chasing pack at the top of the Championship table. Pooler, with two bonus-point wins, have 10 points with Bedwas, Narberth, Neath and Glamorgan Wanderers all on 9 points.

Pontypool’s next match is on Saturday when they welcome old rivals Neath to Pontypool Park, kick-off is the usual 2.30pm.