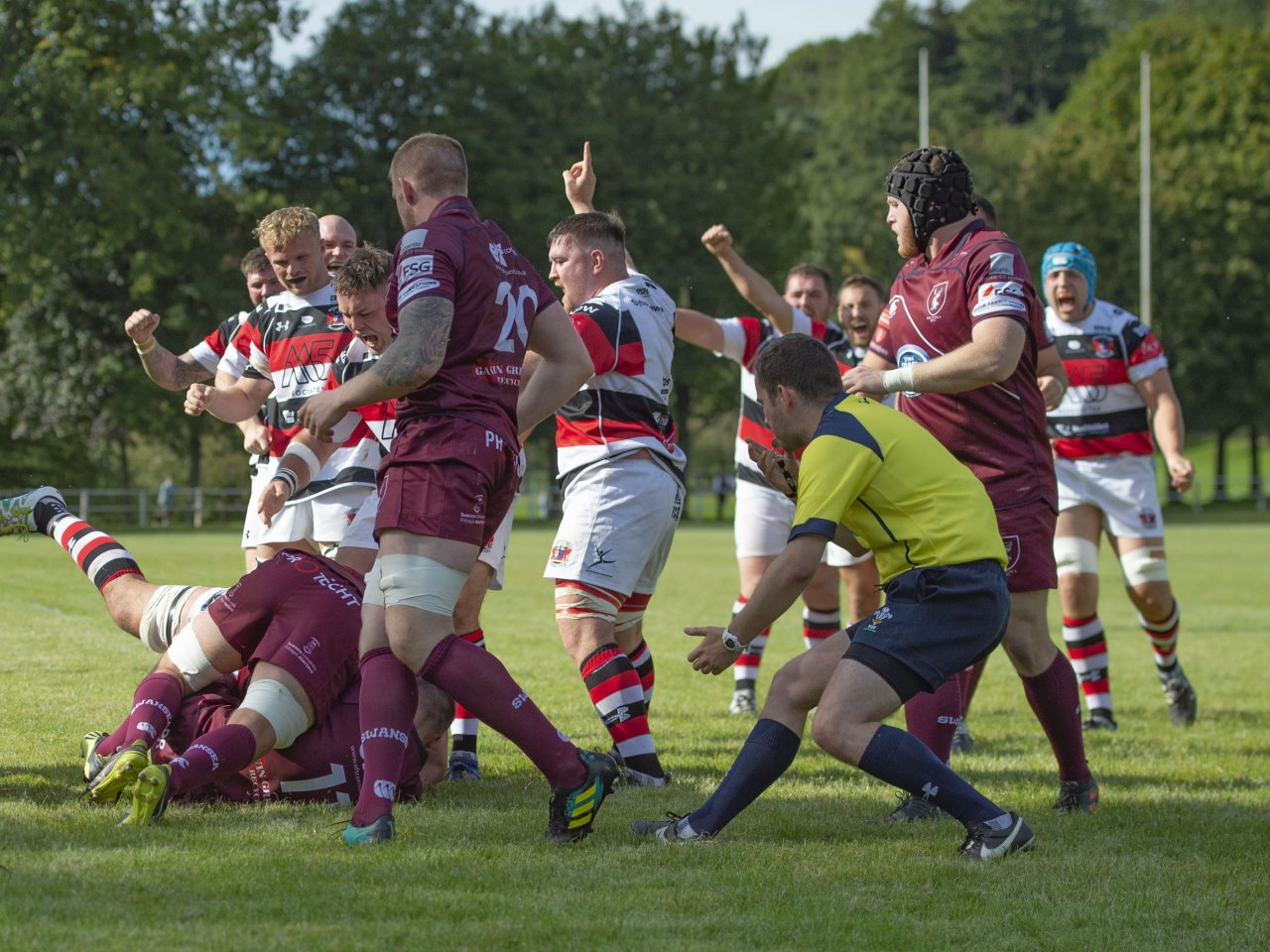 Ruthless Pooler put Neath to the sword in 9-try romp

Neath, relegated from the Principality Premiership, had their much-publicised problems last season but, thankfully, they have put those behind them and have started to re-build their team. With both Pooler and the Welsh All Blacks winning their first two league games, it was a battle of two unbeaten teams but Pooler showed little mercy in beating Neath by a record score, surpassing the 51-0 win at Pontypool Park back in November 1977.

Neath kicked off playing towards the scoreboard end of the ground on a wet afternoon. In the first minute Pontypool were penalised for taking a player out without the ball near their 10-metre line, 15 metres in from the visitors’ right but the attempt at goal went wide. In the 4th minute a pass by Neath went astray and ended up in Geraint Walsh’s possession near Neath’s 22. He passed to right wing Lloyd Lewis and the speedster scored in the right corner for an unconverted try (5-0). Soon after Pooler scored again with a lovely break by Kieran Meek inside his 22 and took play into the Neath half. He offloaded to his captain, Scott Matthews who passed to centre Dan Robinson and he offloaded to Geraint Walsh. The full back kicked through and his opposite number failed to gather the ball. Walsh kicked ahead again and dropped on the ball over the goal line for a try near the posts. Centre Kieran Meek slotted the conversion (12-0).

Midway through the first half Pooler left wing Pat Lewis fielded a relieving kick inside his 22 and gave a long pass to Geraint Walsh who ran up field and passed to Kieran Meek. The centre made a lovely break and fed Lloyd Lewis who scored a try to the right of the posts for his second touchdown of the half. Meek added the extras (19-0). Pontypool were applying pressure on the Neath defence inside the visitors’ 22. After the ball had travelled through several pairs of hands, hooker Darren Hughes crossed for the bonus-point try near the posts. Kieran Meek converted (26-0).

In injury time at the end of the first half Pontypool captain Scott Matthews received a yellow card after Pooler had conceded several penalties in quick succession. From the resulting penalty, which was originally on the half way line but the referee marched back the home side 10 metres for arguing, so the attempt at goal was on Pooler’s 10-metre line in midfield was wide of the target. Half time – Pontypool 26 Neath 0.

Two minutes into the second period Pooler were on the attack inside Neath’s 22. The ball reached flanker Adam Stratton who broke through a tackle and scored 5 metres in from the right corner. Kieran Meek slotted a fine conversion (33-0). To Neath’s credit they kept going and in the 54th minute, and after a period of pressure inside Pooler’s 22, scored a deserved try through second row Rhys Morgan. The conversion failed (33-5). In the 56th minute Scott Evans replaced Craig Price at tight head prop then second row Curtis Gregory made way for Danny Hodge in Pooler’s pack.

Just before the hour mark Scott Evans broke through in midfield on Neath’s 22 and passed to his fellow front rower Darren Hughes who then offloaded the scoring pass to flanker Scott Matthews who crossed under the posts. Kieran Meek again converted (40-5). Then in the 63rd minute Pooler’s loose head prop Aaron Coundley and Neath’s replacement Leon Ward were sin binned for grappling off the ball and, as a result the scrums went uncontested for the enforced absence of Coundley as there was no specialist loose head to come on. In the 67th minute Pooler hooker Darren Hughes was replaced by Lewis Ball.

Three minutes later Owain Leonard made way for Martin Luckwell at scrum half and Dan Robinson was replaced by Clayton Gullis were Pontypool’s final two changes. In the 75th minute, Pontypool were in possession in midfield and a lovely kick ahead by Scott Matthews took play into the Welsh All Blacks’ 22. Adam Stratton got to the ball and also kicked ahead and he dived on the ball over the goal line for an unconverted try to the left of the posts (45-5). Three minutes later Martin Luckwell gathered a charge down kick on Neath’s 22. The ball went across the back line to replacement Clayton Gullis who took the ball at pace and scored a try, 10 metres in from the right corner. Kieran Meek nailed his sixth conversion of the afternoon (52-5).

Two minutes into injury time Pontypool moved the ball from deep. Outside half Richard Powell made a long pass to Geraint Walsh who went through a gap in the visitors’ defence and made a break. He kicked ahead and Martin Luckwell won the race to the touchdown for Pooler’s ninth and final try of a very productive afternoon. Kieran Meek added the extras. Final score – Pontypool 59 Neath 5.

It was good to see Neath again at Pontypool Park and everyone at Pontypool RFC wish their old rivals and friends from The Gnoll well in their re-building and for the rest of the season.

Pontypool, with a very good all round performance, played some wonderful rugby at times; some good handling, great support play, lovely angles of running and some impressive drives as they maintain their one point lead at the top of the Specsavers WRU National Championship league table.

However, the only down side of such a notable victory was Pooler’s lack of discipline – two more in the sin bin and many penalties conceded. This issue must be addressed at training during the week as Pontypool’s next opponents on Saturday will be Narberth ,as they make the long journey west, kick-off 2.30pm. It is always a very tough game at the picturesque Lewis Lloyd Ground so Pooler will need to be better disciplined if they are to have a chance of overcoming the Otters.