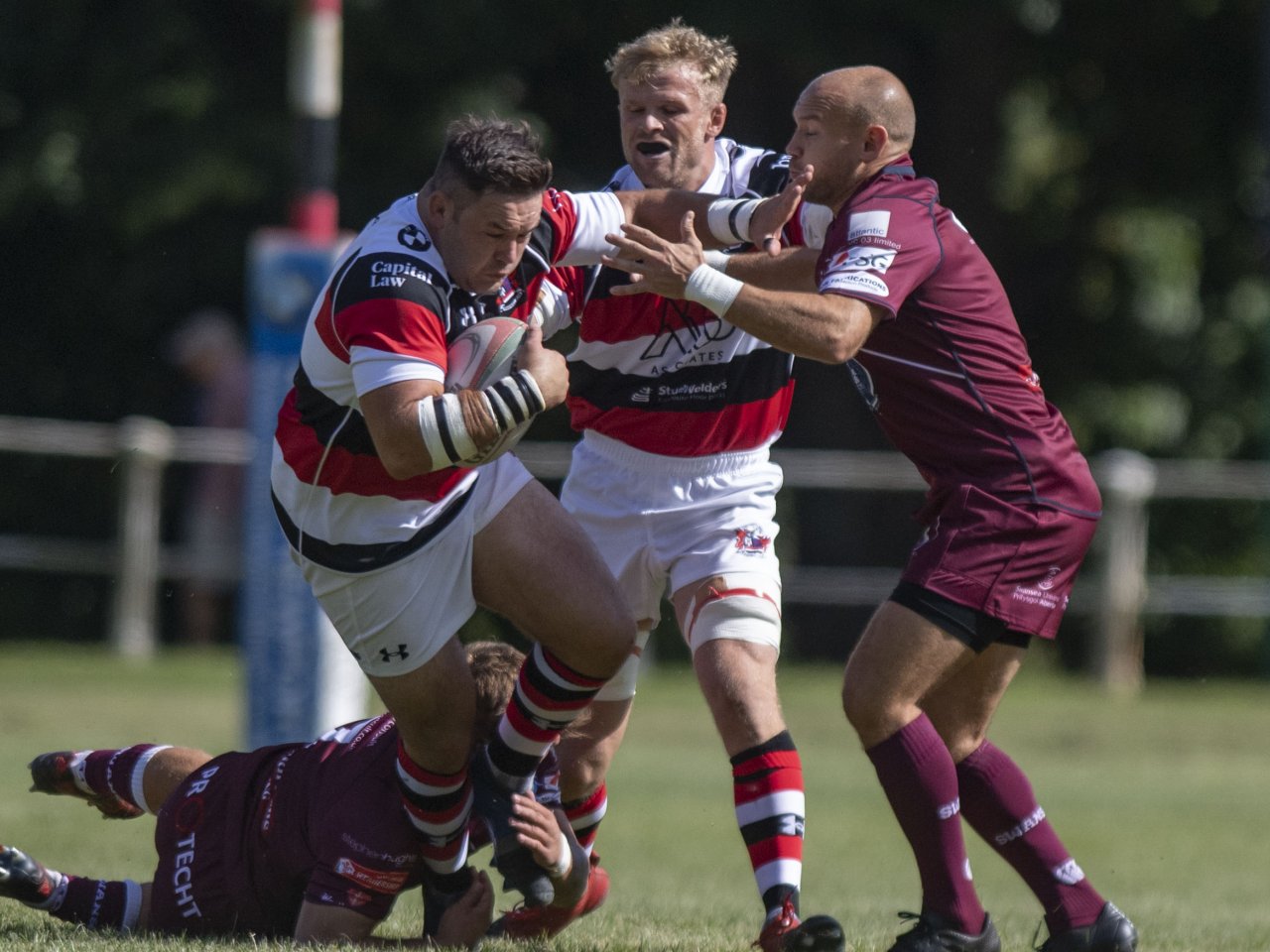 For all of their previous nine visits to Narberth, Pontypool have always found it a challenge to get a positive result as the Otters are always difficult to beat at their picturesque Lewis Lloyd Ground, writes Ray Ruddick. Pooler lost the first five but then gained four narrow wins on the bounce so this Specsavers WRU National Championship game was expected to be a tough ask for the current Championship champions. However, Pontypool produced some quite outstanding rugby and to score eight tries and rack up a half century of points at a ground where Narberth rarely lose in the league is quite an achievement.

Narberth kicked off attacking the clubhouse end of the ground on a wet but mild afternoon. The home side started well and took the game to Pontypool in the early stages. In the eighth minute the Otters were on the attack in Pooler’s 22, the ball was recycled and went left, reached Nick Gale and the full back squeezed in the corner for the opening score of the afternoon. The conversion failed (0-5). Four minutes later Narberth were penalised for holding on deep inside their 22. Pooler kicked for the right corner and from the resulting driving lineout, No8 Ieuan Jones scored a try in the corner. Centre Kieran Meek slotted a fine conversion (7-5).

Midway through the first half, Pooler were in possession near the half way line. Outside half Richard Powell passed to Aaron Coundley and the loose head prop returned the pass. Powell then offloaded to scrum half Owain Leonard. He made a break and took play to Narberth’s 22 and passed to the supporting Ieuan Jones who scored his second try of the game to the right of the posts. Kieran Meek added the extras (14-5). On the half hour mark, Pontypool were penalised for dropping a scrum near half way. Narberth kicked for touch on their right and the lineout was just being formed near Pooler’s 22 when a Pooler player back-chatted the referee and he awarded Narberth another penalty. Nick Gale was successful with his attempt at goal (14-8). In the 33rd minute Pontypool were in possession near Narberth’s 10-metre line in midfield. Kieran Meek made a lovely break and passed to Owain Leonard who raced 25 metres to score a try under the posts. Kieran Meek slotted the easy conversion. Half time – Narberth 8 Pontypool 21.

Early in the second half, the Otters were penalised for taking out a player without the ball between their 22 and 10-metre line. Once again, Pooler kicked for the right corner and from the ensuing driving lineout, captain and flanker Scott Matthews went blind and popped the scoring pass out to Owain Leonard and he scored the bonus-point try, and his second of the afternoon, in the corner. The conversion attempt failed (26-8).

In the 56th minute Pooler made some changes with Scott Evans replacing Craig Price at tight head prop, Owain Leonard made way for Martin Luckwell, then on the hour Marcus Jones went on for full back Geraint Walsh. As a result of this substitution, Pooler made positional changes with Kieran Meek going to full back, Pat Lewis went from left wing to centre and Marcus Jones onto the left wing. Shortly after Narberth’s tight head prop left the field injured and with no available replacement, uncontested scrums were introduced as Lewis Ball replaced Darren Hughes in the middle of the Pooler front row.

In the 65th minute Kieran Meek gathered a relieving kick near the half way line and headed down the near left touchline. He handed off a would-be tackler and dived over in the left corner for a well-taken individual try but he failed with the conversion attempt (31-8). With 10 minutes remaining, Rhys Clarke made way for Curtis Gregory in the second row for Pontypool. Two minutes later Pooler were putting the Otters’ defence under pressure inside the home 22. Play went right and Richard Powell gave a lovely long pass to put Lloyd Lewis in the clear and the wing ran in for a try to the right of the posts. Richard Powell converted (38-8).

With five minutes remaining the visitors won turnover ball near Narberth’s 10-metre line on Pooler’s right. The ball reached Lloyd Lewis and he sprinted 40 metres to score his second try of the match, to the right of the posts. Kieran Meek, again, added the extras (45-8). Then in the second minute of injury time, replacement hooker Lewis Ball received a flat pass in midfield, made a break which took play into the home 22. The ball was recycled, play went left and loose head prop Aaron Coundley powered his way over for a try, 15 metres in from the left corner. The conversion was missed. Final score – Narberth 8 Pontypool 50.

This was such a positive and disciplined performance by Pontypool – a pleasure to watch. Keep it going, Pooler, and well done to all concerned.

Pontypool’s next league game is on Saturday when they welcome Trebanos to Pontypool Park, kick-off 2.30pm. Then the following two Saturdays, Pooler will be on the road – at Gelligaled Park to face Ystrad Rhondda on 19 October and at Margam Sports Ground to take on Tata Steel seven days later. Kick-off for both games is the usual 2.30pm.