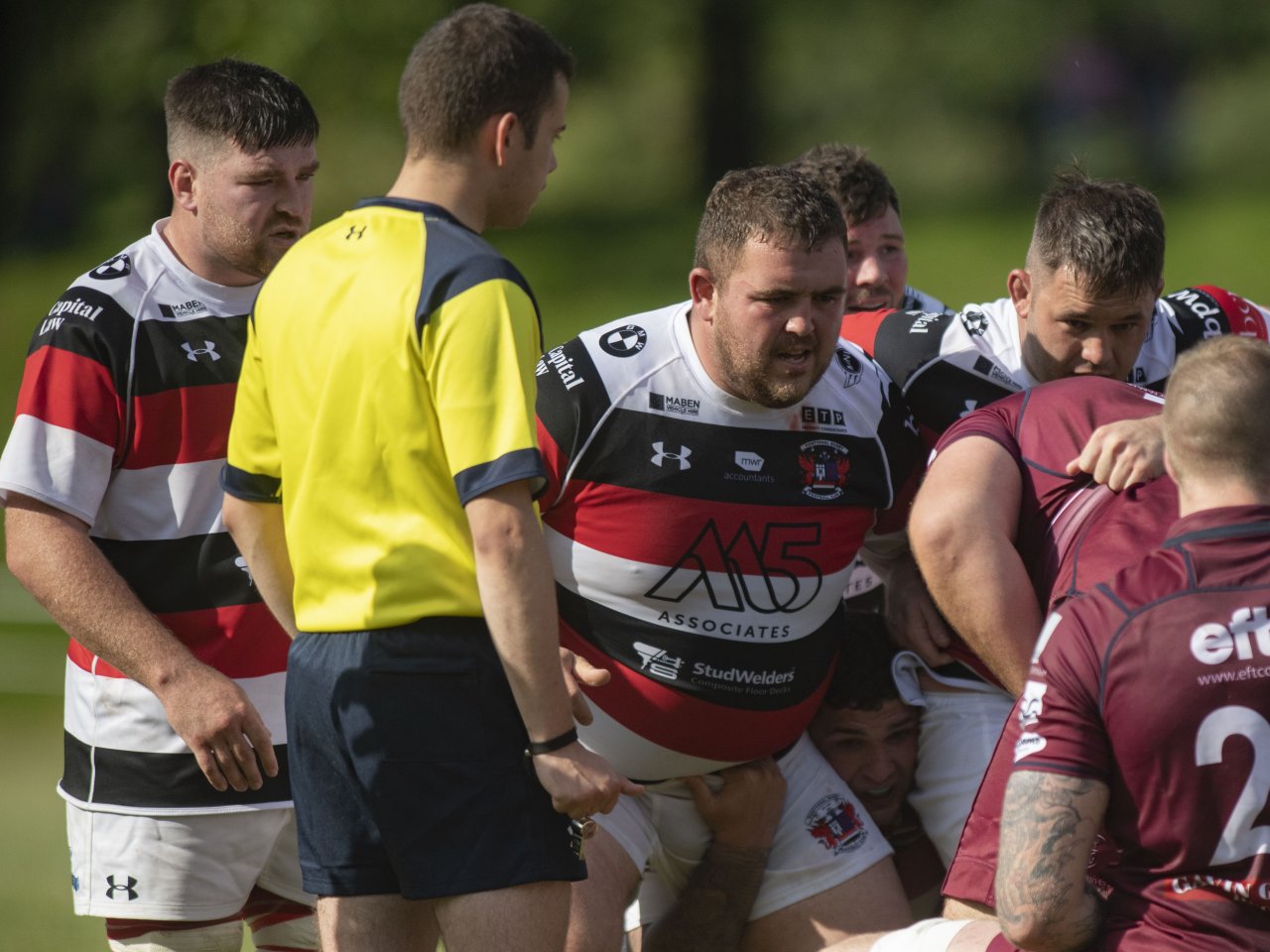 Despite playing with 14 men for 55 minutes, Pontypool were far too strong for struggling Ystalyfera as the home side scored eleven tries in this Specsavers WRU National Championship match at Pontypool Park on Saturday, writes Ray Ruddick. Home flanker Mike Herbert was dismissed in the 25th minute for dangerous play and the referee, Gavin Roberts, had no option but to show Herbert the red card.

Pontypool were led out by scrum half Aaron Quick, who was making his 150th league and cup appearance for the club, having made his debut on 7 September 2013 against Beddau at Mount Pleasant Park in a 41-21 victory.

Ystalyfera kicked off attacking the scoreboard end of the ground on a wet and windy afternoon with rain failing throughout the match, which made playing conditions difficult. In the fifth minute from a scrum between the visitors' 22 and 10-metre line, outside half Kieran Meek received the ball and offloaded to Jordan Thomas who came in off his left wing to cut through ‘Fera’s defence. He passed to Pat Lewis and the centre glided over for a try under the posts. Kieran Meek converted (7-0).Three minutes later Pontypool were guilty of holding on in a ruck just outside their 22 in midfield and Ystalyfera's outside half Steffan Castle slotted the kick at goal (7-3).In the 17th minute Pooler had a scrum feed on their right, near the visitors’ goal line. The ball was released and went left to Kieran Meek who fed Marcus Jones, coming infield from his right wing, and he scored a try to the right of the posts. Kieran Meek added the extras (14-3).

Then, in the 25th minute, came the incident where Mike Herbert was sent off and Pooler were reduced to 14 men for the remainder of the match. On the half hour, play was near the half way line with Ystalyfera in possession. They chipped ahead and the ball was gathered by impressive home flanker Adam Stratton near his 10-metre line and he sprinted 60 metres to touch down under the posts. Kieran Meek converted (21-3).In the 39th minute Pat Lewis made a break near ‘Fera’s 10-metre line then offloaded to the supporting Marcus Jones on the 22 and the winger crossed for his second try of the game and Pooler’s bonus-point score. Once again Kieran Meek slotted the conversion. Half time Pontypool 28 Ystalyfera 3.

In the fourth minute after the break Jordan Thomas made a lovely break inside the visitors’ half, passed to Lewis Ball inside the 22 and the hooker scored a try to the right of the posts. Kieran Meek slotted the conversion (35-3).In the 50th minute, after several scrums near Ystalyfera’s goal line, Pontypool were awarded a penalty try for collapsing and ‘Fera’s tight head prop Jonathan Williams was yellow-carded (42-3).Three minutes later some good handling by young second row Curtis Gregory put Aaron Quick in the clear and the scrum half celebrated his 150th appearance as he scrambled over for a try to the left of the posts. Kieran Meek duly converted (49-3).

On the hour Pontypool had a scrum near the Ystalyfera’s 22.The ball reached Kieran Meek who kicked to the left corner.Jordan Thomas gathered and did well to flip the ball inside to Pat Lewis who scored his second try of the afternoon in the corner. Kieran Meek kicked his seventh conversion from seven attempts which was his last action of the match (56-3).Pontypool then made all five changes at the same time. Off came Kieran Meek, Aaron Quick, loose head prop and captain-for-the-day Aaron Coundley, Lewis Ball and second row Rhys Clarke and they were replaced by Matthew Lewis, Owain Leonard, Craig Price, Darren Hughes and Scott Matthews respectively.

In the 62nd minute home full back Jake Morgan made a fine run down the left flank. He passed to Pat Lewis and the youngster scored his hat trick try near the posts. Replacement outside half Matthew Lewis kicked the conversion (63-3).Two minutes later Pooler were now rampant and with some impressive handling, considering the poor conditions, Scott Matthews rounded off a good move with a try 15 metres in from the right corner. Matthew Lewis added a further two points (70-3).In the 68th minute visiting hooker Daniel Williams picked up from a ruck inside Pooler’s 22 and, with no defence in front of him, scored a try 5 metres in from the left corner. The conversion attempt failed (70-8).However it was Pooler who completed the scoring when, with three minutes remaining, they stole a lineout inside Ystalyfera’s 22 on Pooler’s right.Pontypool’s replacements got in on the act as scrum half Owain Leonard made a dart for the goal line, passed to back rower Scott Matthews who then put hooker Darren Hughes over for Pontypool’s final try of the game, which was converted by Matthew Lewis. Final score – Pontypool 77 Ystalyfera 8.

This was another very good performance by Pontypool, having played almost an hour with 14 men. They are playing with confidence and high skill level with some slick passing and clinical finishing. Next Saturday Pooler travel to The Gnoll to take on old rivals Neath in another league encounter, kick-off 2.30pm.Then the following Saturday (25th January) Pontypool welcome Premiership high-flyers Carmarthen Quins to Pontypool Park in the quarter-final of the Specsavers WRU National Cup. The kick-off for this match will be at 5.15pm as it will be televised live.