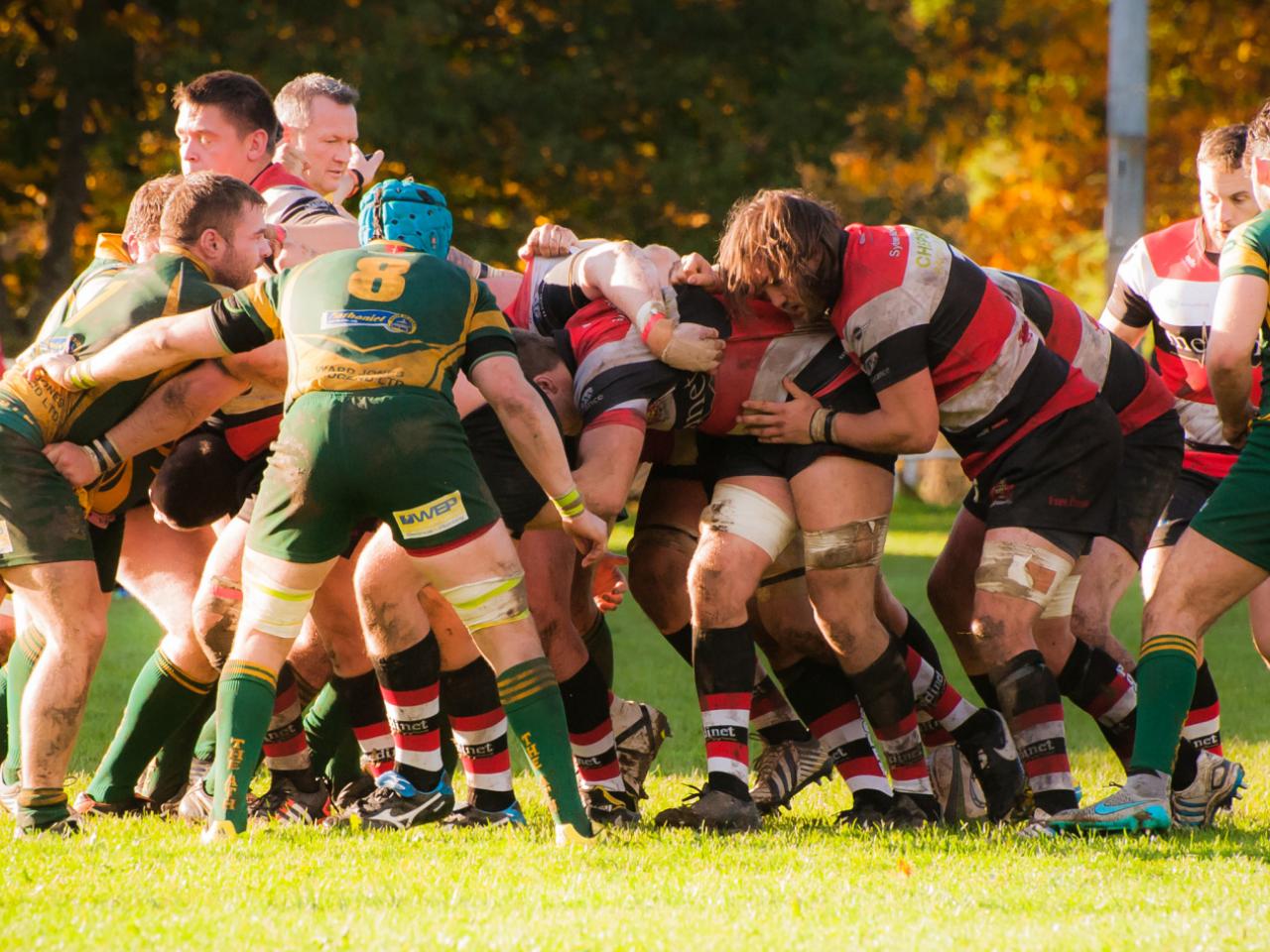 Pontypool extended their unbeaten run to 6 matches when they overcame a determined Bridgend Athletic side at Pontypool Park on Saturday. It was a hard-fought game with plenty of errors from both teams but Pooler came away with a bonus-point win to keep them in touch with the front runners in the Championship table.

Bridgend Athletic kicked off playing down the slope. Pooler took play to the visitors’ 22 where Athletic were penalised for offside in front of their posts. Home full back Clayton Gullis stepped up and kicked the goal to put Pontypool into an early lead (3-0). From a lineout 10 metres from the Pooler line on Athletic’s right, the visitors drove their hosts back and over the goal line with No 8 Stuart Edbrooke scoring a try which outside half Scott Govan converted (3-7).

Pontypool went on the attack in Athletic’s 22 and the visitors were penalised for side entry at a ruck. After a couple of forward drives, Pooler’s hooker and captain Ben Parry crossed for a try under the posts which Clayton Guillis duly converted (10-7). Shortly after Pooler were penalised for holding on just inside their 22 about 7 metres infield on their right but the shot at goal went wide. There was no further scoring and the close first half came to an end with Pooler’s noses slightly in front – Pontypool 10 Bridgend Athletic 7.

At the start of the second period, Pooler changed both props with Jamie Jeune replacing Fraser Young at loose head and Joe Popple making way for Ryan Harford on the tight head side. Early in the second half Bridgend Athletic were penalised for a deliberate knock-on in midfield near their 10 metre line but the attempt at goal was off target. Shortly after Pontypool went on the attack and from a scrum 8 metres from the visitors’ goal line, Athletic disrupted illegally and the referee awarded a penalty try to the home side. This was converted by Clayton Gullis (17-7).

Pooler went back on the offensive and a move down the left flank was halted by another deliberate knock on, this time by right wing Craig Lewis and he was shown the yellow card. For Pontypool, Rhys Dyer replaced Aaron Quick at scrum half and soon after Adam Scanlon made way for Ed King in the second row. Pontypool had a scrum near the Athletic 22 and pushed their opponents back “at a rate of knots”. The scrum disintegrated and Pooler were still driving forward when the referee awarded another penalty try to the home side which Clayton Gullis converted (24-7). Pat Lewis then came on for outside half Sam Mills.

The scrums then went uncontested due to injuries to the Bridgend Athletic front row. However, Pooler were in search of the bonus-point try and put their visitors under pressure. This pressure was too much for Athletic and, after several phases, replacement Pat Lewis took the ball at speed, went through a gap in the opposition defence and scored the all-important fourth try for the home side in the left corner. Clayton Gullis kicked a fine conversion. (31-7). Near the end of the game, Pooler captain Ben Parry limped off and was replaced by the returning Fraser Young. Final score Pontypool 31 Bridgend Athletic 7.

This wasn’t a vintage display by Pontypool but they managed to get another win in a scrappy game. Pontypool do not have a game next Saturday as it is the Rugby World Cup Final at Twickenham. The next game for Pooler is on Saturday 7 November when they visit Mount Pleasant Park to take on Beddau, kick-off 2.30pm.