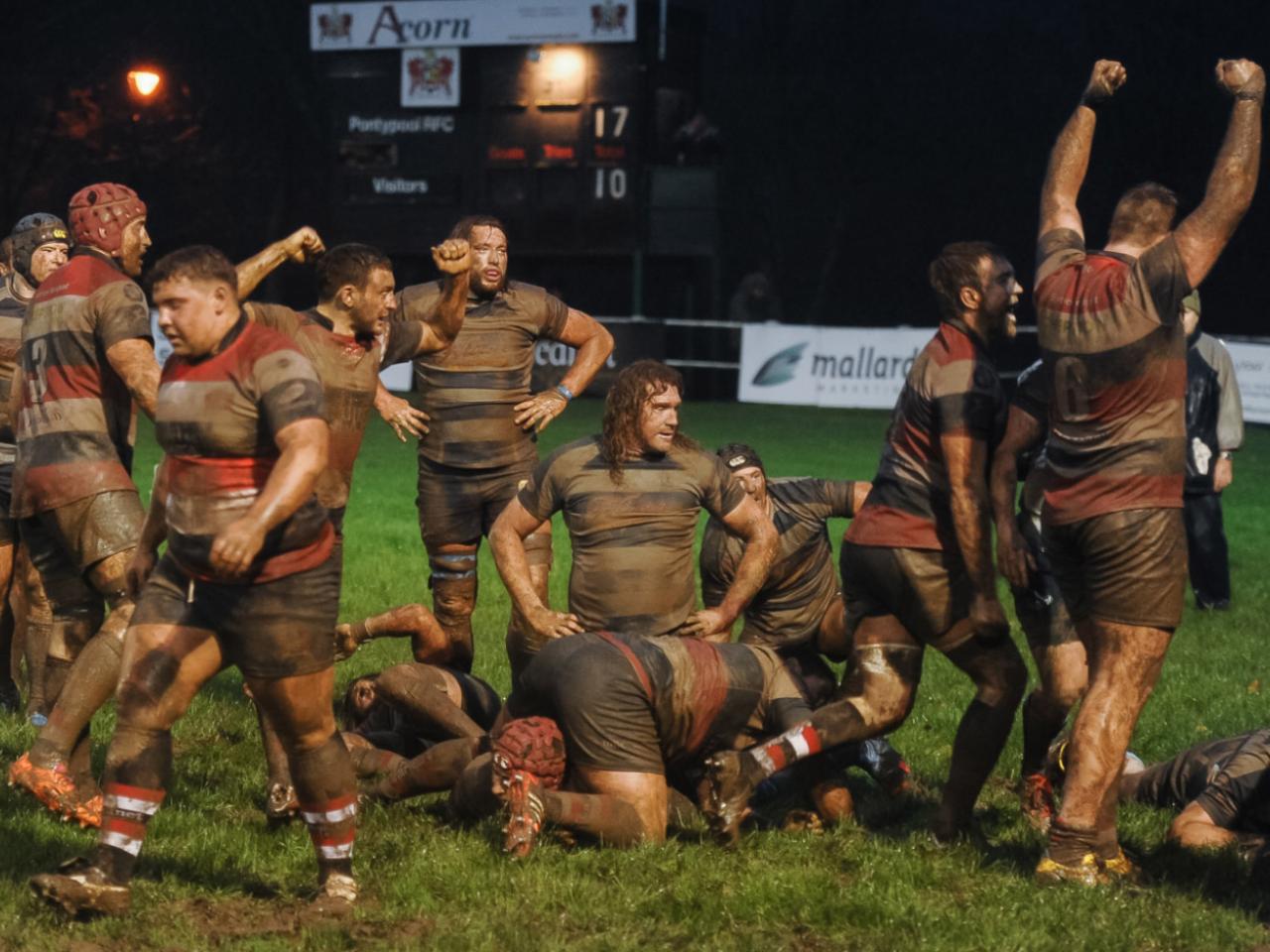 Pontypool welcomed Narberth, who made the long trip from Pembrokeshire to wet and windy Pontypool Park in the SWALEC Championship. The conditions were atrocious with driving wind and rain on a boggy pitch making it difficult to play running rugby as the ball was very slippery. Back in September in the opening game of the league campaign, Pontypool won at the Lewis Lloyd Ground for the first time in six attempts so was looking for the first ever double over their west Wales opponents.

The Otters kicked off playing down the slope. After 5 minutes play, the ball was won by Pooler on their left near the Narberth 22. Scrum half Aaron Quick took the ball and passed right to his half back partner Sam Mills who missed out a player and passed to hooker and captain Ben Parry. The skipper offloaded to flanker Jordan Williams who then released right wing Nathan Brooks who crossed in the right corner. The neat conversion was kicked by centre Clayton Gullis which took his league points tally to over 100 for the season (7-0). In the 18th minute Narberth hit back with a good try by full back Johnny Morgan to the left of the posts after the ball went through several pairs of hands. Right wing Jordan Roberts added the extras (7-7).

From the kick-off, Pooler’s open side flanker Rob Nash charged down a clearance kick, gathered the ball and passed to loose head prop Joe Popple who ran 15 metres, turned inside and crossed for an unconverted try (12-7). 12 minutes before the break Pooler were penalised for a high tackle 35 metres from their goal line to the right of the posts but the shot at goal went wide. Three minutes later, another high tackle called by the referee in a similar position but a little near the posts and this time Jordan Roberts kicked the three points (12-10). Going into the last five minutes of the half, Pooler were penalised for not binding at a scrum on the half way line in midfield but the long range attempt at goal failed. Pontypool finished the half in the Narberth 22 but the Otters’ defence held firm. Half time Pontypool 12 Narberth 10.

After a quarter of hour of the second period Pooler made a couple of changes in the pack with Jamie Jeune coming on for Joe Popple and Lee Williams made way for Elliott Ferriman in the second row. Pooler started to get the better of their opponents and play was in Narberth’s 22. After 63 minutes their pressure paid off when, from a driving lineout the Pooler pack drove their the Narberth eight over the visitors’ goal line to the left of the posts and the experienced Rob Nash was credited with the try. The conversion failed (17-10). Garin Harris then replaced tight head prop Ryan Harford for Pontypool.

The Pooler pack again pressurised the Narberth defence in the visitors’ 22 with several drives towards the line and the bonus-point try was scored by replacement prop Jamie Jeune. The conversion failed on what was not a good afternoon for the kickers. Ben Parry took a knock left the field with a couple of minutes to go and he was replaced by the returning Joe Popple. Full time Pontypool 22 Narberth 10.

This was a great victory for Pooler in awful conditions. Narberth were very difficult to break down but Pontypool stuck to the task in hand and were rewarded with a thoroughly deserved bonus-point win. Next Saturday Pontypool travel to St Helen’s to take on second-placed Swansea (kick-off 2.30pm) in what promises to be one of the games of the season with Pontypool looking to gain revenge on The Whites' 32-16 success at Pontypool Park in September – Pooler’s only defeat in the league so far this season. The next home game will be on Boxing Day when traditional rivals Newbridge visit Pontypool Park for a local derby, kick-off 2.30pm.