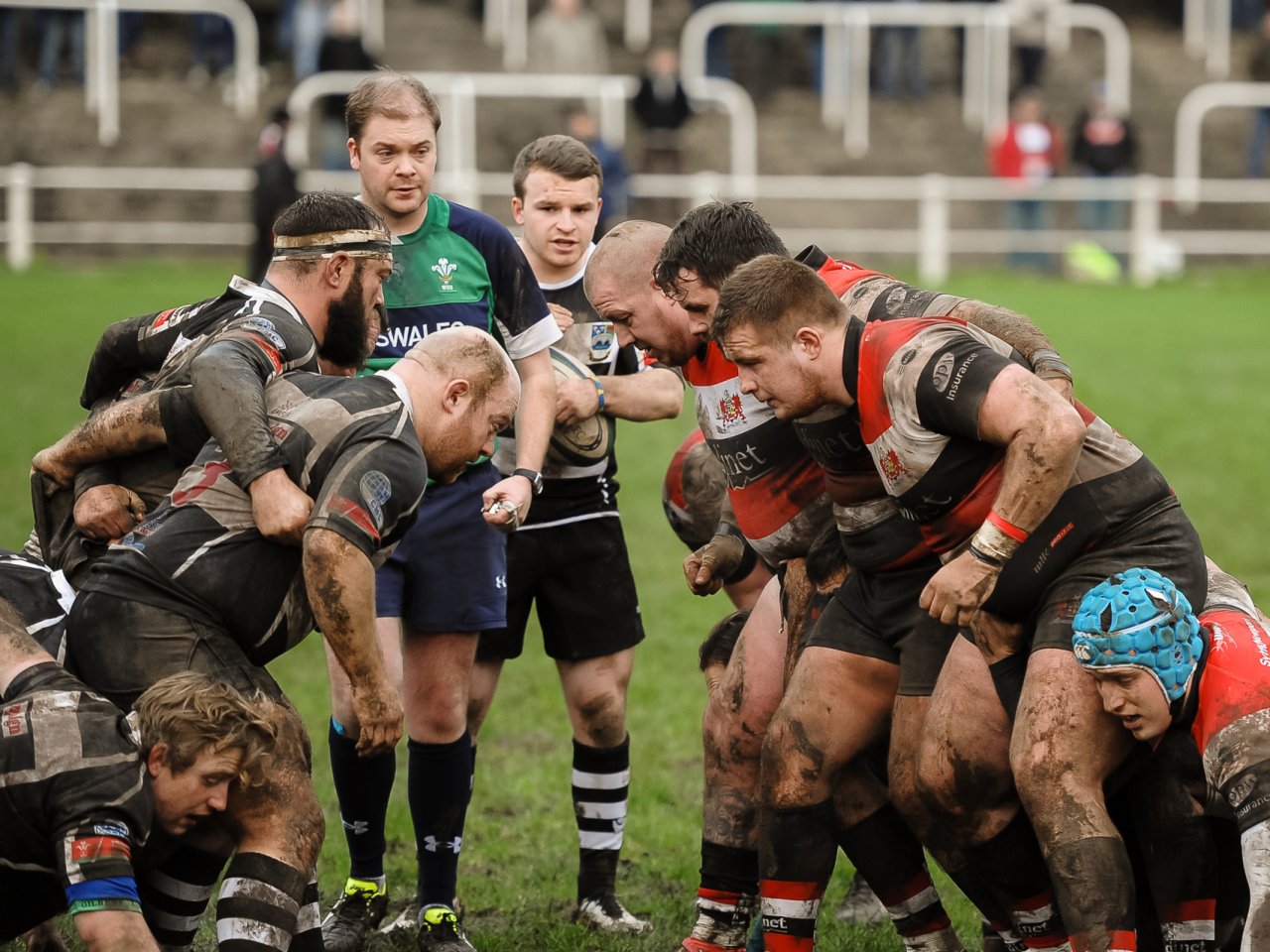 Pontypool welcomed Premiership side Bedwas to a cold Pontypool Park for a first round tie in the SWALEC Cup. This was the fourth meeting between the two clubs in this competition with Bedwas winning the last two encounters while Pontypool won the first. It was a spirited performance by the Championship club but it was Bedwas who progressed to the second round, outscoring their hosts by three tries to one.

Bedwas kicked off playing down the slope. After three minutes the visitors opened the scoring with a try by full back Matthew John following a good build up. Outside half James Dixon added the extras (0-7). On 16 minutes both open side flankers, Pooler’s Rob Nash and George Lee for Bedwas, were shown the yellow card by referee Gareth John of Chepstow for a minor scuffle.

With a quarter of an hour remaining of the first half, Bedwas were penalised for holding on near their 22 in front of the posts and Pooler’s outside half Tom Hancock slotted the kick at goal (3-7). After 31 minutes Bedwas went back on the attack and after several forward drives deep in the Pooler 22, the ball went right and Matthew John crossed for his second try of the afternoon. The conversion failed (3-12). With just over 5 minutes of the half to go and Bedwas were penalised for side entry 35 metres from their line to the right of the posts but Tom Hancock struck the upright with his shot at goal. Half time score Pontypool 3 Bedwas 12.

At the start of the second period, loose head Joe Popple made way for club captain and hooker Ben Parry with Jamie Jeune, who started at hooker moved to loose head prop. In the second minute of the second half Pooler were on the offensive and camped near the Bedwas line. After several drives, centre Sione Tu’ipulotu crashed over for an unconverted try to put the home side back in the game (8-12). Ten minutes later, Rob Nash made way for Nathan Hudd in the Pooler back row.

After 63 minutes play, Bedwas were on the back foot and were penalised for holding on in front of their posts, 15 metres out. Tom Hancock slotted the easy kick to put the home side within a point of their opponents (11-12). Pontypool tight head prop Ryan Harford was then replaced by Garin Harris.

With about 15 minutes of the match remaining, Pooler strayed offside 35 metres from their goal line and 15 metres from Bedwas’ left touchline. The attempt at goal by James Dixon went narrowly wide. On 68 minutes Bedwas scored the decisive try through right wing Rory Budina which was converted by James Dixon (11-19). Pooler made several changes with Rhodri Usher, Tom Hancock and Rhys Dyer being replaced by Clayton Gullis, Sam Mills and Aaron Quick respectively. Shortly after Fraser Young replaced Jamie Jeune at loose head prop.

In the final few minutes of the game Bedwas replacement Kieron Jenkins was sin-binned for an offence at a scrum, just inside Bedwas’ half. Pontypool threw everything at Bedwas in the closing stages but the Premiership side held on for a well-earned victory.

Pontypool gave a very good account of themselves against a good Bedwas side which did enough to progress in the competition. This encouraging performance by Pooler will give them confidence going forward as they have difficult league games to re-arrange against Bargoed (away) and RGC 1404 and Merthyr (both home). Next Saturday Pontypool will be back in SWALEC Championship action with a visit to the Dairy Field to take on bottom-of-the-table Llanharan (kick off 2.30pm). Pooler’s next home game is on Saturday 30 January when they welcome new boys Newcastle Emlyn to Pontypool Park (kick-off 2.30pm).