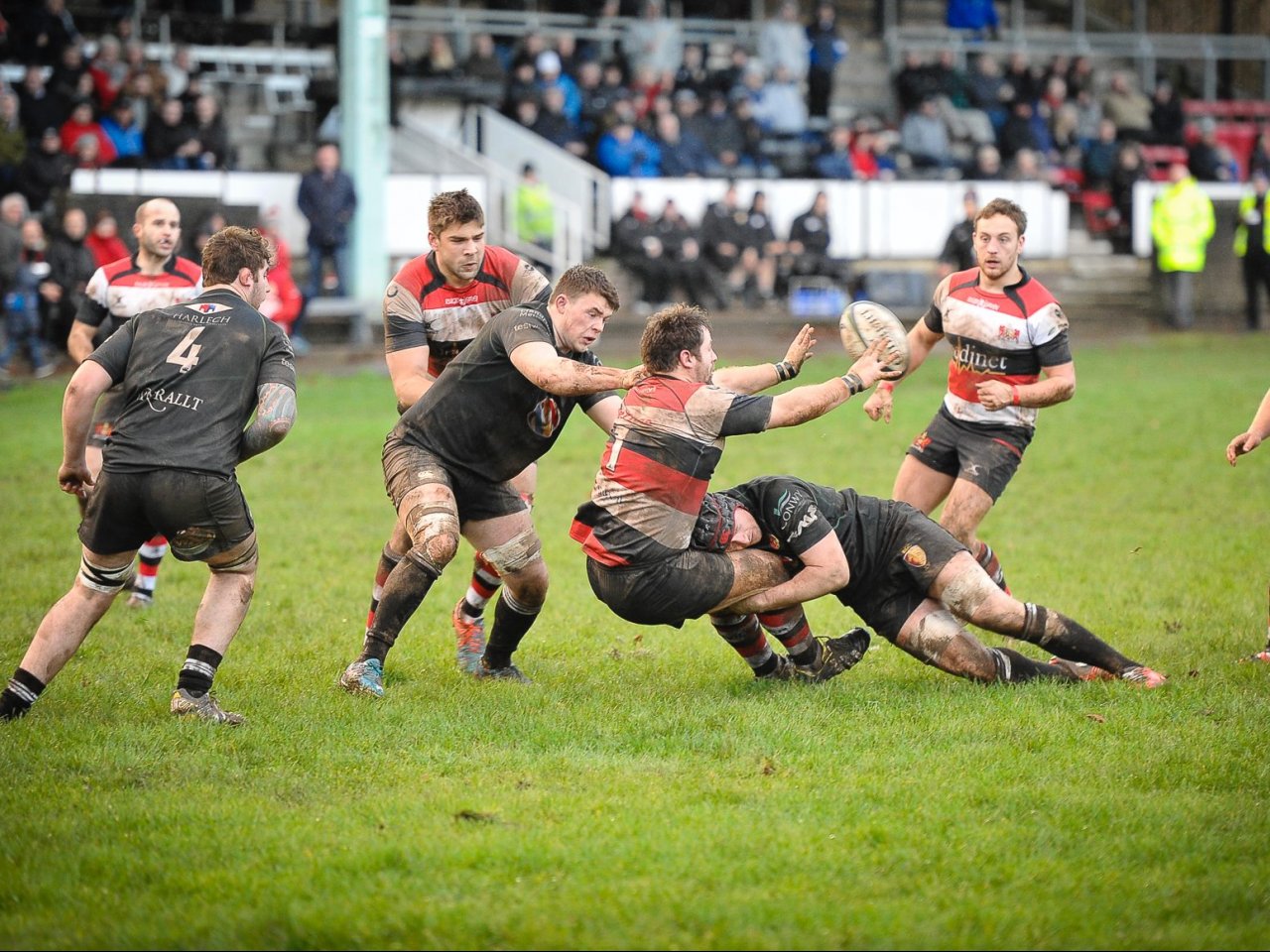 Pontypool made the long journey north to take on RGC 1404 at Eirias Park in Colwyn Bay and left empty handed as the hosts thoroughly deserved their victory. Pooler were looking for their third consecutive victory at the home of The Gogs having won 26-20 in October 2013 and 7-6 in the final game of last season but came off second best.

RGC 1404 kicked off defending the changing rooms end of the ground. After 6 minutes one of the home second rows was penalised for an illegal push 35 metres from the RGC goal line, 15 metres in from Pooler’s right touchline and full back Clayton Gullis stepped up to put the visitors ahead with a good kick at goal (3-0). Five minutes later Pontypool were penalised for the back row breaking off a scrum on half way in midfield but RGC’s outside half James Lang was wide with his attempt at goal. Just over half way through the first period and Pooler blind side flanker Gareth Rusby-Davies took a knock to the head and was replaced by Elliott Ferriman. Matthew Thomas dropped into the back row and Ferriman went into the second row.

After 25 minutes Pooler were guilty of not rolling away just inside their 22, 5 metres in from touch on RGC’s left. The home side kicked for the corner and from the ensuing driving maul, The Gogs were penalised for side entry. Five minutes later Pooler were penalised for tackling off the ball on the opposite side of the pitch in their 22. RGC again kicked for the corner and this time from the driving maul the home forwards drove their opponents over the goal line and the unconverted try was credited to No 8 Zygimantas Radzius (3-5). From the re-start RGC were guilty of crossing in midfield 35 metres from their goal line in front of the posts and Clayton Gullis put Pooler back in the lead with a successful shot at goal (6-5). On the stroke of half time and a good break in midfield by James Lang took play into Pooler’s 22. The ball was recycled, moved left and home flanker Andrew Williams crossed in the corner for a try. The conversion attempt hit the upright. Half time score RGC 1404 10 Pontypool 6.

After 57 minutes Pooler took play into the RGC 22 with some good forward drives which brought the visitors to within five metres of the RGC goal line. The ball went left and Matthew Thomas squeezed in the corner for an unconverted try to put the visitors back in front (11-10). Midway through the second half loose head prop Jamie Jeune was replaced by Jamie Edwards. Soon after Pooler were guilty of a late tackle inside their 22 to the right of the posts and James Lang slotted his kick at goal (11-13). On 64 minutes Pontypool’s tight head prop Garin Harris made way for Ryan Harford. Three minutes later Pooler were penalised for a high tackle inside their 22 to the left of the posts and James Lang stretched the home advantage with another successful penalty (11-16). Soon after, Sam Mills made way for Tom Hancock at outside half for the visitors.

In the 69th minute, RGC went over the top at a ruck 5 metres from their goal line to the left of the posts. Pooler opted for a scrum. Pontypool’s eight drove forward, the RGC pack was penalised and Pooler again opted for another scrum. However, the home defence held firm. After 78 minutes, play was deep in the home half when a RGC cross kick was gathered on the left by James Lang who ran 50 metres to score in the corner for another unconverted try (11-21). Going into injury time and visiting captain and hooker Ben Parry took a knock and was replaced by the returning Garin Harris. Shortly after, Dan Brooks, brother of Pooler wing Nathan Brooks, came on for scrum half Aaron Quick who had been hobbling for most of the second half. In the 10th minute of injury time, and with the final play, The Gogs scored their bonus-point try when left wing Tiaan Loots crossed in the left corner. Once again the conversion failed. Final score RGC 1404 26 Pontypool 11.

This was a set back in Pontypool’s quest for promotion to the Premiership, compounded by Bargoed’s 12-5 home victory over league leaders Merthyr. RGC performed well and their backs looked dangerous while Pooler made too many mistakes with inaccurate passing and wayward kicking. It was only the second league game of this campaign when Pooler failed to register at least one league point. The other was the home game with Swansea at the start of the season. It was a bad day at the office for Pontypool and they will need to be more clinical in their next game on Friday 18 March when they welcome Merthyr to Pontypool Park, kick-off 7.15pm, for what promises to be a cracking encounter.