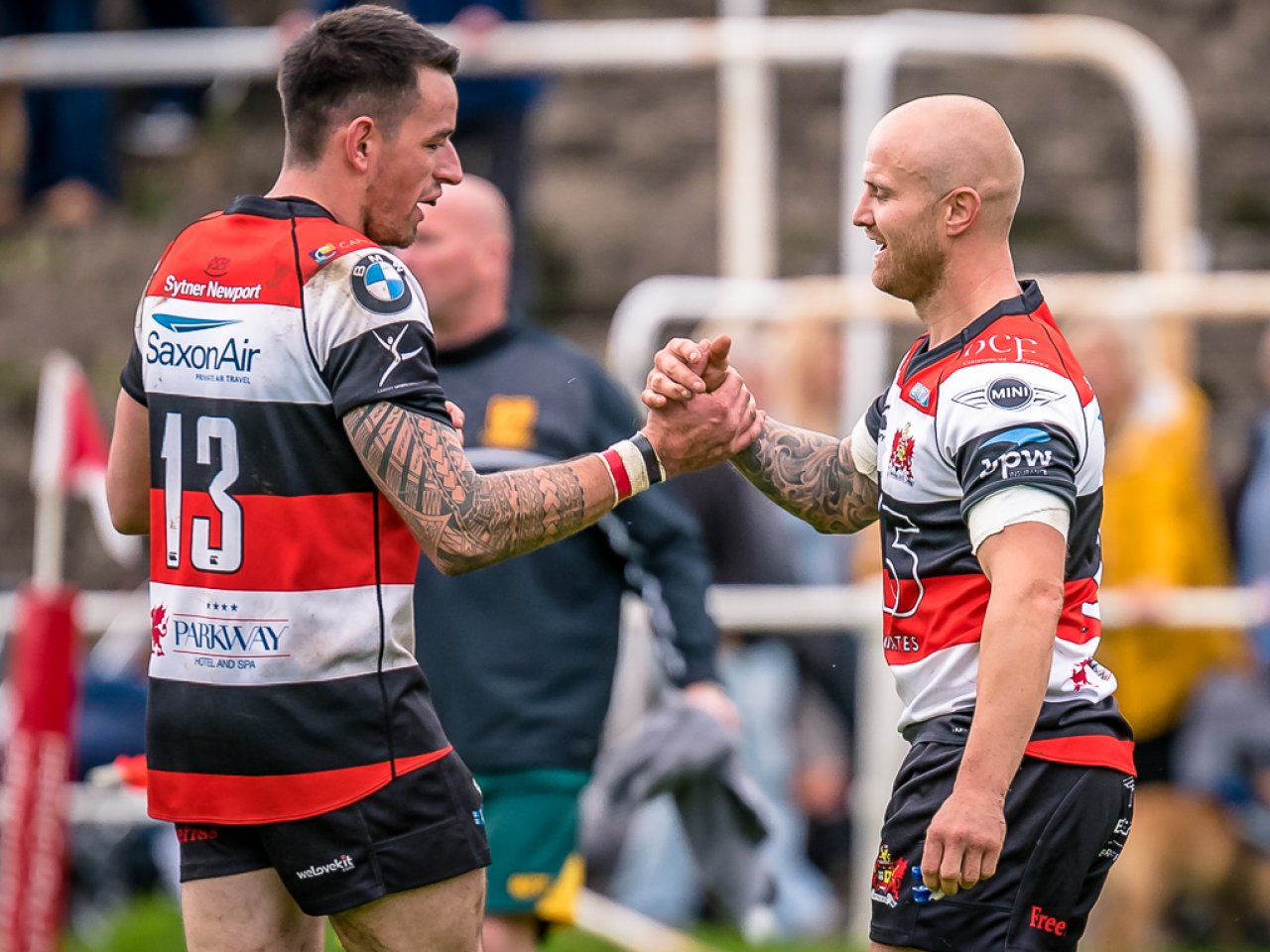 Pontypool made the trip to Tennant Park on Wednesday evening for a WRU National Championship match and came across a determined Skewen side but managed to come away with a hard-earned bonus-point victory, writes Ray Ruddick.

Skewen played very well in parts and tested the Pooler defence on a number of occasions but the champions were equal to the challenge. Skewen scored a first half try but could not break through Pontypool’s well organised defence in the second period.

Pontypool kicked off on a fine but damp evening playing towards the clubhouse end of the ground. In the 13th minute Pontypool recycled ball inside Skewen’s 22 and went right. A long pass from outside half Kieran Meek to Owen Williams on the right put the winger into space. He then passed inside to the supporting Clayton Gullis and the centre scored an unconverted try to the right of the uprights (5-0). Four minutes later good interpassing between forwards and backs released full back Jordan Thomas who swerved and beat a couple of defenders to score a try under the posts. Kieran Meek slotted the easy conversion (12-0).

Mid-way through the first half Skewen hit back. The home side had a lineout, 5 metres from the visitors’ goal line in their left corner. Pooler tapped the ball back but it went loose and Skewen hooker Aled Morris gathered and scored an unconverted try (12-5). In the 38th minute home loose head prop Jonny Gethin was sin-binned for a high tackle inside Skewen’s 22. With the game just entering injury time at the end of the first period, Jordan Thomas fielded a relieving kick by the home side about 35 metres from the Skewen line and the young full back turned on the gas. He passed to Owen Williams who crossed in the right corner for a try which was converted by Kieran Meek with a fine kick. Half-time score – Skewen 5 Pontypool 19.

In the 51st minute another good handling move by the champions took play to the Skewen 22 and impressive young flanker Mike Herbert took the ball at speed to score Pooler’s bonus-point try under the posts with Kieran Meek adding the extras (26-5). Pontypool then made a couple of changes – Ollie Drake replaced Craig Price at tight head prop and Martin Luckwell made way for Aaron Quick at scrum half. Five minutes later Pontypool were awarded a penalty at a scrum in midfield near the home 10-metre line. Pooler kicked for the left corner and from the ensuing lineout, the Pontypool pack drove their opponents over the goal line and hooker Ben Parry came up with the ball having scored an unconverted try (31-5).

Just after the hour mark visiting loose head prop Aaron Coundley was sin-binned for side entry to a ruck inside Pooler’s 22. Pontypool then had to make a temporary replacement due to the yellow card with hooker Alex Watkins, making a welcome return from a four-month lay-off due to injury, taking the field in place of Owen Williams, but the scrums went uncontested until Coundley returned. Then in the final ten minutes Pooler made more changes – Callum Davies replaced Mike Herbert in the back row, Alex Watkins stayed on and Ben Parry left the field, and Owen Williams stayed off and was replaced by Josh Hurley. Final score – Skewen 5 Pontypool 31.

This was a particularly gutsy showing by Skewen and they can be proud of their performance against in-form Pontypool. However, congratulations to the Pontypool team as this was Pooler’s 20th consecutive league win of the season and they have amassed 98 league points out of a possible 100.

Pontypool remaining two re-arranged league games are also away. On Saturday 14 April they travel to Rhydyfelin (the ground is behind Hawthorn Leisure Centre) and the final match of the season will be on Saturday 21 April when the WRU National Championship champions made the long journey west to the Lewis Lloyd Ground to take on Narberth in a mouth-watering top-of-the-table clash. Both matches kick-off at 2.30pm. Pontypool will be presented with the Championship trophy at Narberth.