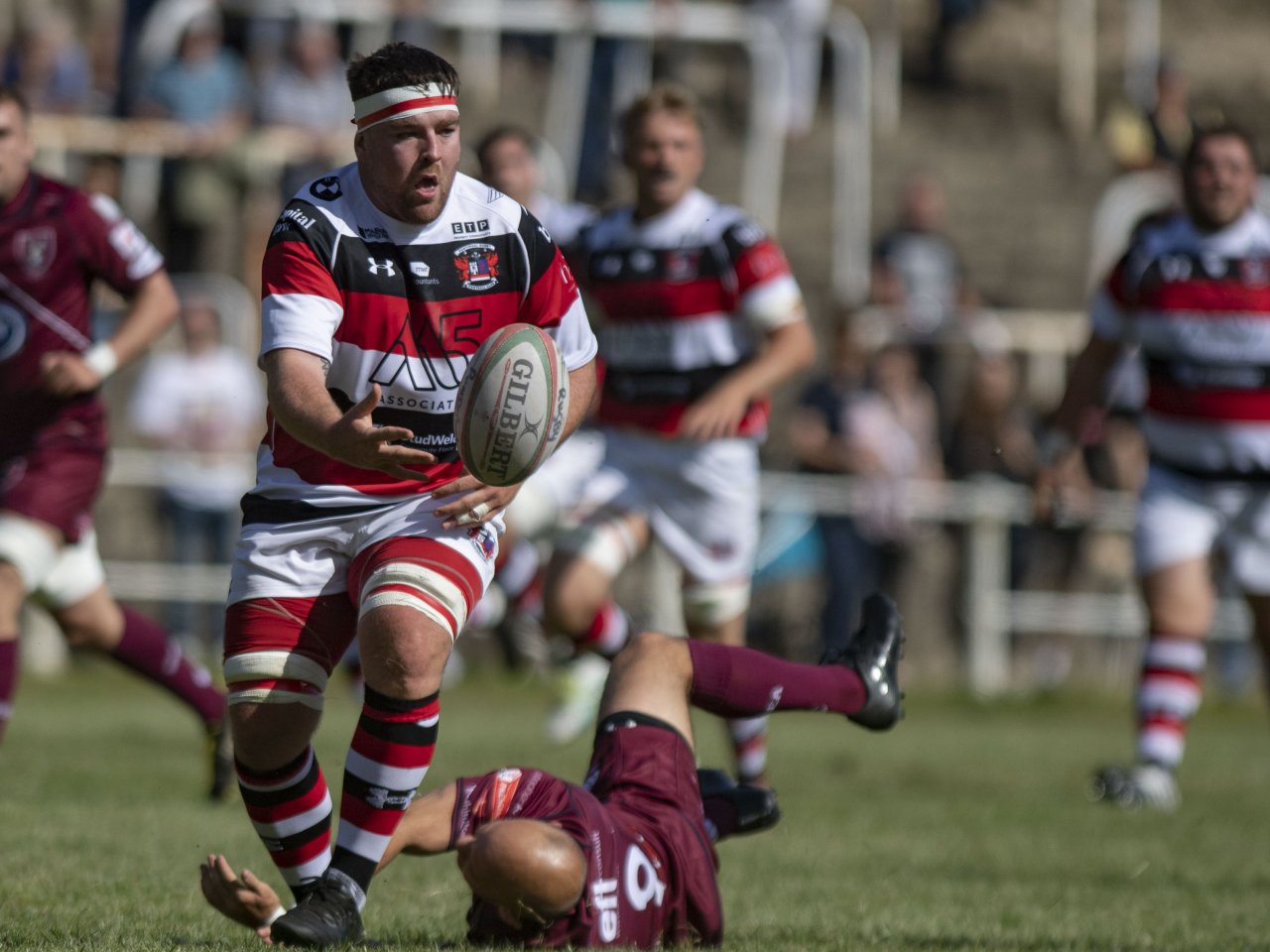 Another comprehensive victory for Pooler as perfect start continues

Pontypool travelled to Gelligaled Park on Saturday to take on last season’s runners-up Ystrad Rhondda in the Specsavers WRU National Championship and came away with another impressive victory and a fourth consecutive score of 50 points or more, writes Ray Ruddick. Pontypool ran in another eight tries, including a Lloyd Lewis hat trick as Pooler’s perfect start to the season, with 30 points out of 30, continues.

Ystrad Rhondda kicked off playing towards the railway end of the ground on a wet and mild afternoon with a mixture of rain and sunshine. It was as early as the first minute when Pontypool opened the scoring. Scrum half Aaron Quick put up a high kick near half way for Lloyd Lewis to chase. The young winger caught the ball and made 30 metres. He grubber-kicked ahead and fellow wing Jordan Thomas scored a try to the left of the posts. Centre and captain-for-the-day Kieran Meek kicked the conversion (7-0). In the 12th minute Pooler struck again with a move which started near the half way line. The ball was worked left with Kieran Meek, full back Clayton Gullis, left wing Jordan Thomas and centre Amosa Nove all in the move before Nove gave the scoring pass to Meek who scored near the posts and he duly added the extras (14-0).

In the 23rd minute Kieran Meek received the ball near Pooler’s 10-metre line. He put in an accurate high cross kick for Lloyd Lewis and the right winger caught the ball and sprinted 35 metres to score under the posts. Once again Meek slotted the conversion (21-0). Six minutes before the interval Ystrad Rhondda’s full back Jay Harris and Pooler’s Jordan Thomas were sin-binned for a scuffle in midfield. Two minutes later play was inside Ystrad’s 22 with Pooler in possession. The ball went right from outside half Matthew Lewis to Kieran Meek to Amose Nove and finally to Clayton Gullis who crossed for the bonus-point try, 15 metres in from the corner. Meek kicked the conversion (28-0). Then in injury time at the end of the first period Pooler were in possession near Ystrad’s 22. Gullis chipped ahead and Lloyd Lewis won the race to the touchdown in the right corner, for his second try of the afternoon. The conversion failed. Half time score – Ystrad Rhondda 0 Pontypool 33.

Ten minutes into the second half referee Gwyn Morris had to issue another two yellow cards, this time to home no 8 Tom Jevons and Clayton Gullis for the visitors after another minor skirmish. Three minutes later Pooler scored again through Jordan Thomas when he crossed in the left corner after a storming run in midfield by no 8 Ieuan Jones. Once again Kieran Meek converted (40-0). On the hour mark Pooler were again on the attack inside Ystrad’s 22. The ball reached Matthew Lewis and the young outside half made a lovely break, offloaded to his captain Kieran Meek who crossed for a try under the posts. Meek also added the conversion (47-0). Pooler flanker Adam Stratton took a knock and was replaced by Rob Nash.

Ystrad Rhondda never gave up and their efforts were rewarded when flanker Jarrad Llewellyn scored a try between the uprights. This score was converted by centre Rhys Truelove (47-7). In the 66th minute Clayton Gullis was replaced by Richard Powell for the visitors as Matthew Lewis went to full back and Powell to outside half. Three minutes later Pontypool made further changes when Aaron Quick made way for Owain Leonard at scrum half and flanker Craig Attwell was replaced by Darren Hughes who went to hooker and Lewis Ball who started at hooker went into the back row.

With ten minutes remaining, Pooler won turnover ball inside their 22 and Richard Powell made a great break out of defence. He made fully 40 metres and passed to Kieran Meek who then offloaded to Lloyd Lewis for the speedster to register his try hat trick as he glided over near the posts. Meek slotted his seventh conversion out of eight attempts. Late in the game Zenon Szwagrzak took over from Scott Evans on the tight head for the visitors. Final score – Ystrad Rhondda 7 Pontypool 54.

This was another good performance by Pontypool with all the scoring coming from the backs. The Pooler forwards proved too strong for their opponents and gave their backs plenty of good possession. Pontypool are on the road again next Saturday when they travel along the M4 to Margam Sports Ground to take on Tata Steel, kick-off 2.30pm. It is usually a high scoring game at Margam so should be an exciting match to watch.