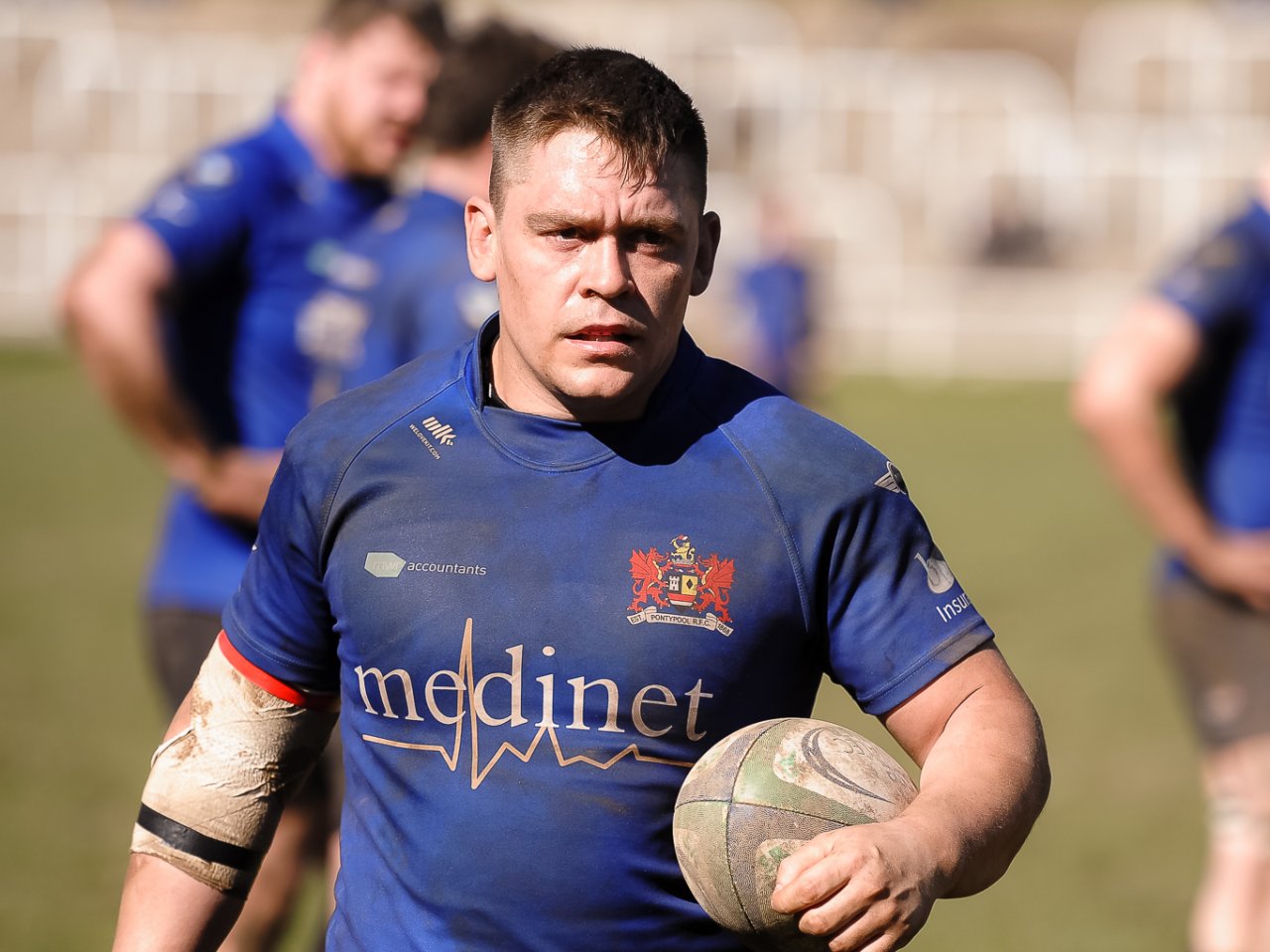 Pontypool travelled to Margam Sports Ground to take on Tata Steel in the SWALEC Championship and came away with a deserved bonus-point victory which now means that if Pooler win two of their final three matches, they will be promoted to the Principality Premiership. Pontypool centre Dan Robinson made his 100th appearance for the club.

Pontypool kicked off attacking the cricket ground end with a strong wind at their backs. In the first 90 seconds Tata were penalised for deliberately wheeling the scrum, 15 metres infield on Tata’s 22 to the left of the posts and visiting full back Clayton Gullis slotted the kick at goal (3-0). After 9 minutes play and from a Pontypool attacking lineout on their right, the forwards took the ball on and eventually it was spun left, reaching Clayton Gullis. He went through a gap in The Saints defence and scored a try near the posts – he duly converted (10-0). Two minutes later Pooler were back on the attack and with good handling by backs and forwards, back row forward Jordan Williams scored an unconverted try to the right of the posts (15-0). Just over a quarter-of-an-hour had gone when Pooler were penalised for kicking the ball out of a scrum 30 metres from their line, 15 metres in from Tata’s right touchline but the attempt at goal went wide.

Mid-way through the first half Pooler were in Tata’s half when outside half Sam Mills made a great break in midfield and took play into Tata’s 22. The ball was re-cycled and play went left, the ball reached Clayton Gullis who did well to keep his balance and scored another try to the left of the posts, and he added the extras (22-0). Three minutes later Sam Mills tried a long pass in midfield near half way but was intercepted by his opposite number Simon Evans who scored under the posts, converted by full back Lloyd Rogers (22-7). Five minutes before the interval, Pooler were in Tata’s half and were putting width on the ball. They spun it right and Jordan Williams, who found himself on the wing, crossed for the bonus-point try, the conversion was missed (27-7). Three minutes later Sam Mills made another break near the Tata 22 and, from a ruck 10 metres from the home goal line, right wing Josh Hurley picked up and darted over for a try in the right corner, converted by Clayton Gullis. Half time score Tata Steel 7 Pontypool 34.

Thirteen minutes into the second period Pooler were on the attack but, after conceding a couple of penalties in quick succession, they found themselves deep in their 22. They gave away another penalty and the home side took a quick tap from which Matthew Llewellyn scored a try near the posts, converted by Lloyd Rogers (34-14). A quarter-of-an-hour later and The Saints scored their third try courtesy of back row forward David Griggs from a driving lineout. The conversion failed (34-19).

With ten minutes remaining, Tata were penalised for crossing on Pooler’s 10 metre line. Pontypool centre Sione Tu’ipulotu took a quick tap and made ground. He passed to the supporting Pat Lewis and the young wing sprinted 35 metres to score near the left corner. The conversion was missed (39-19). Five minutes later Pooler introduced some fresh legs with Sam Mills, Sione Tu’ipluotu and second row Elliott Ferriman leaving the field and they were replaced by Tom Hancock, Nathan Brooks and Matthew Thomas respectively. Then as the game was entering injury time Pooler’s final two replacements took the field – loose head prop Jamie Jeune made way for Jamie Edwards and Joe Popple replaced tight head prop Garin Harris. However, it was the home side who completed the scoring with their bonus-point try through replacement Jon Phillips who touched down in the left corner. The conversion went wide. Final score Tata Steel 24 Pontypool 39.

The wind was a significant factor during the game. Pontypool played some great rugby in the first half with the wind and held on well in the second with Tata throwing everything at them. This was a very important win for Pooler as, probably the biggest cheer of the afternoon was when news filtered through that Swansea had beaten RGC 1404 with a last-minute drop goal. The top five teams in the SWALEC Championship are as follows: Merthyr played 23 with 103 points, Swansea played 24 with 103 points, Pontypool played 23 with 88 points, Bargoed played 22 with 82 points, RGC 1404 played 22 with 78 points. The top four will be promoted to the Principality Premiership. Next Saturday Pontypool will be on the road again, to the Brewery Field to take on Bridgend Athletic. The following Saturday Pontypool will welcome RGC 1404 to Pontypool Park in what is probably the most important game for Pooler in recent years. The final game of the season is on Saturday 30 April when Pooler visit Bargoed Park. All three matches kick-off at 2.30pm.