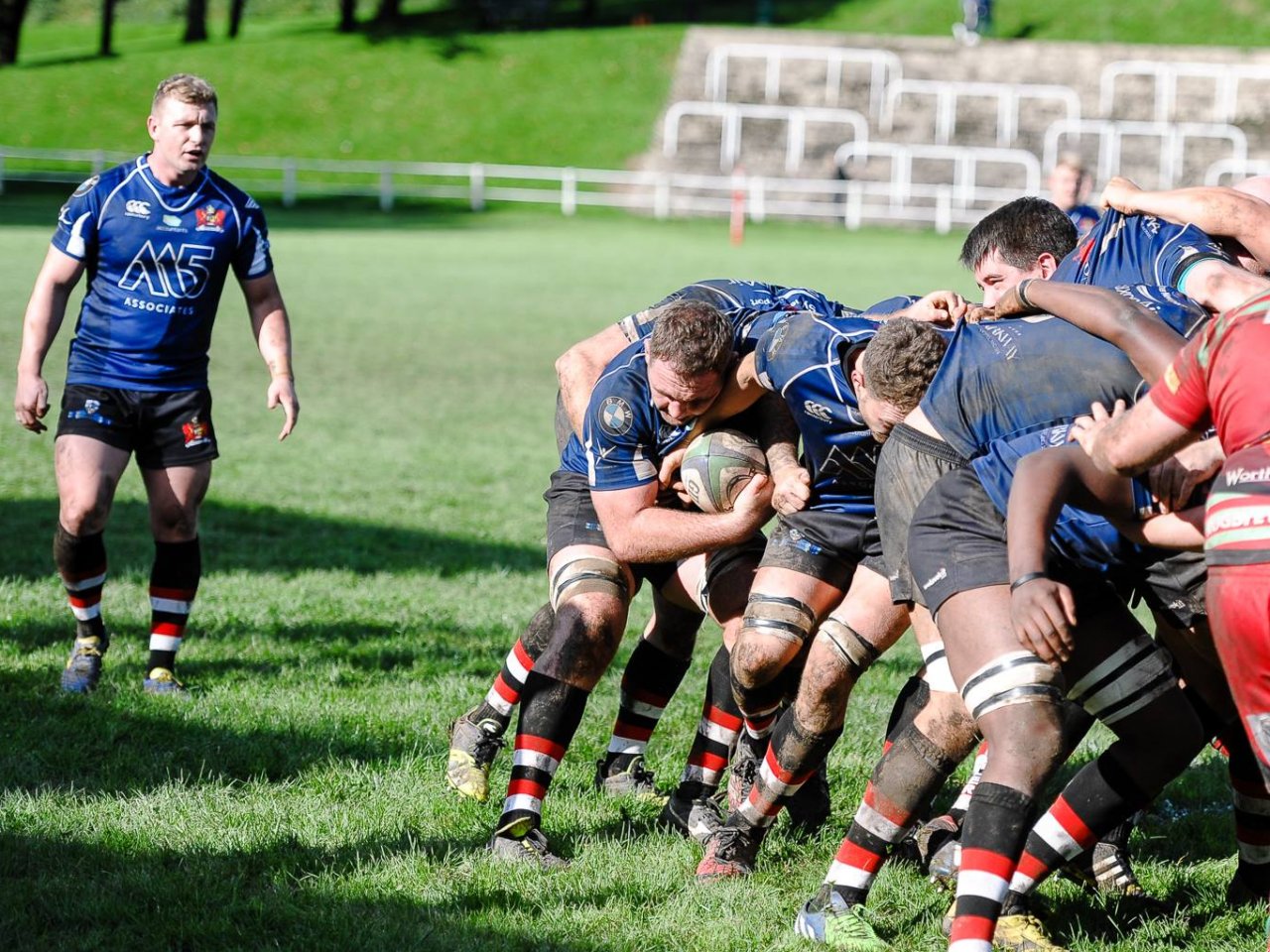 It was second against first as Tata Steel welcomed Pontypool to Margam Sports Ground on a fine and dry afternoon as the only two unbeaten teams went head-to-head in a compelling match in the WRU National Championship, writes Ray Ruddick. Pontypool showed much grit, determination and no little skill in relieving their hosts of their 100% record in front of a healthy crowd with a large contingent of Pooler fans witnessing the best Pontypool performance since their win at Merthyr 12 months ago.

Tata Steel kicked off attacking the cricket end of the ground. The first quarter-of-an-hour was evenly matched with both sides gaining territory but couldn’t turn pressure into points. Then in the 17th minute Pontypool were penalised for “questioning the referee’s decision” on their 10-metre line in front of their posts and home outside half Liam Popham kicked the goal to put his side into the lead (0-3). Ten minutes later Pooler were guilty of a high tackle in a similar position and Popham double his side’s lead with another successful shot at goal (0-6). Just before the half-hour mark Tata were penalised at a scrum for driving in and across, just outside their 22 in front of the posts and Pooler outside half Matthew Jones slotted the kick at goal (3-6).

In the 31st minute Josh Hurley, who was seemingly competing for a high ball, was harshly yellow carded for taking out a player in the air. Five minutes before the interval The Saints scored a try near the posts through flanker Ryan Hall after the ball went loose from a lineout. The conversion was kicked by Liam Popham (3-13). A minute later Tata were caught offside 30 metres from their line on Pooler’s left and Matthew Jones kicked the penalty (6-13). In the 40th minute Pooler were on the attack and applying pressure on the home defence. Play was in the Tata 22 and Pooler had recycled the ball and went right. Matthew Jones offloaded to Sione Tu’ipulotu and he gave a long pass out to his fellow centre Brandon Kent and the youngster crossed for a try on the right, converted by Matthew Jones (13-13). Just before the interval Pontypool were penalised for a high tackle 5 metres inside Tata’s half in midfield, but the attempt at goal fell short. With a penalty count of 14-2 against the visitors, they did well to go into the break level. Half time score Tata Steel 13 Pontypool 13.

At the start of the second period the experienced Rob Nash replaced Callum Davies at open side flanker for Pontypool. Three minutes after the restart Tata were guilty of deliberately wheeling a scrum on their 10-metre line, 20 metres infield on Pooler’s left. Matthew Jones stepped up to kick Pontypool into the lead for the first time in the match with a good goal (16-13). Five minutes later Pooler scrum half Rhys Dyer took a knock and left the field. He was replaced by Aaron Quick. Soon after Tata were again penalised for a deliberate wheel at a scrum 15 metres in from Pooler’s left touchline, 30 metres from Tata’s goal line. Matthew Jones slotted the kick to increase the visitors’ lead (19-13). In the 52nd minute Pontypool loose head prop Aaron Coundley was sin-binned for a high tackle on the half way line. Two minutes later Pooler made a couple of changes as Gareth Rusby-Davies was temporary replaced by prop Jamie Jeune as front row cover for Coundley and veteran tight head prop Ryan Harford made way for Ollie Drake.

A quarter-of-an-hour had gone of the second half when Pooler were guilty of holding on just outside their 22 to the right of the uprights and Liam Popham kicked the penalty to bring his side to within three of the visitors (19-16). In the 58th minute Pontypool were again penalised for an offence at a ruck in front of their posts and Liam Popham slotted the easy kick to bring the scores level again (19-19). Just after the hour mark home number 8 Matthew Llewellyn was yellow carded for handling in a ruck just outside Tata’s 22 in front of the posts and Matthew Jones put Pontypool back in front with another successful penalty goal (22-19). Aaron Coundley then came back on after his sin-binning as Jamie Jeune left the field and Gareth Rusby-Davies returned.

After 66 minutes Pontypool’s impressive second row Max Williams won a lineout 5 metres from the home goal line and the powerful Pooler pack drove their opponents over the line with hooker and captain Ben Parry scoring an unconverted try (27-19). Ten minutes later The Saints were penalised for side entry at a ruck on their 22, 10 metres in from Pooler’s left touchline and Matthew Jones kicked his sixth penalty goal of the afternoon (30-19). In the 78th minute Pontypool’s blind side flanker Gareth Rusby-Davies was replaced by Matthew Thomas. Two minutes later Pontypool’s Brandon Kent was sin-binned for a deliberate knock-on near his 22. However, the visitors held out the remaining 5 minutes of injury time to come away with an impressive victory. Final score Tata Steel 19 Pontypool 30.

In a match of 35 penalties and 4 yellow cards, the game wasn’t allowed to flow and it was lost as a spectacle the crowd was hoping to see. Given the circumstances therefore, this was a great result for Pooler which takes them five points clear at the top of the table. For the next two Saturdays Pontypool welcome the two newcomers to the Championship to Pontypool Park, with Skewen the visitors next Saturday and Bedlinog making the relatively short journey the following Saturday and, in both cases, it will be the first meeting of the clubs. Pooler’s next away game will be on Saturday 29 October when they make the long journey west to picturesque Dol Wiber to take on Newcastle Emlyn. All matches kick-off at 2.30pm.