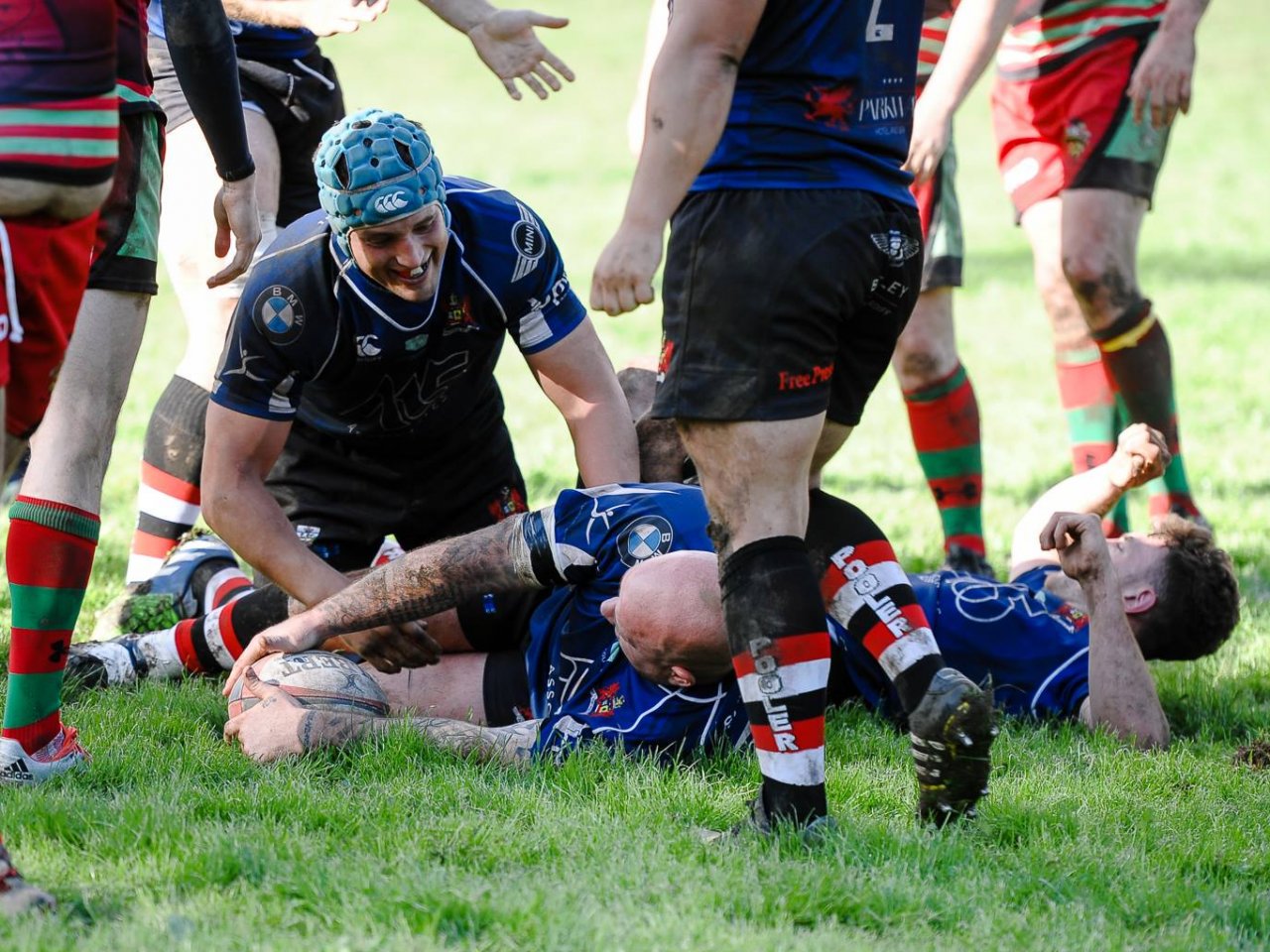 It was bottom versus top as league leaders Pontypool travelled to Broadacre for their first visit in 15 seasons to take on basement club Dunvant in the WRU National Championship in what turned out to be a lively battle, writes Ray Ruddick. Each team received a red and a yellow card during the second half.

Pontypool kicked off attacking the car park end of the ground, playing into a strong wind. In the third minute play was in the Pooler 22 and, following a Dunvant knock-on, the referee was playing advantage. Pontypool’s left wing Marc Thorley made a 50-metre break along the left flank and passed inside to loose head prop Jamie Jeune who then made more ground. The ball was recycled and moved right. It reached wing Nathan Brooks who managed to squeeze in the corner for the opening try of the afternoon. The difficult conversion failed (5-0). Three minutes later the visitors were on the attack again and the ball reached Jamie Jeune in midfield and he sprinted 25 metres to the goal line to score an unconverted try to the left of the posts (10-0).

In the 12th minute Dunvant were on the attack and centre Rhodri Wall dropped a goal from outside Pooler’s 22 to the left of the posts (10-3). Ten minutes later Marc Thorley made another break on the left and took play into Dunvant’s 22. The ball was recycled and moved right and second row Ben Egan was on hand to crash over for a try to the right of the uprights. Outside half Matthew Jones added the extras (17-3). Just on the half-hour mark play was in the Pooler 22 and the hosts were putting their visitors under pressure and this was rewarded when scrum half Ben Ley scored a try in the right corner which was converted by outside half Aled Lewis with a fine kick (17-10). With just over six minutes to go to half time, Pooler hit back with the bonus-point try by centre Clayton Gullis in the left corner after a break by tight head prop Ryan Harford in midfield. The conversion was missed. Half time score Dunvant 10 Pontypool 22.

Five minutes into the second period Pooler put together a good move with the ball going through several pairs of hands and veteran Ryan Harford finished off the move with a try near the posts. Matthew Jones slotted the conversion (29-10). Then in the space of ten minutes, Pooler introduced their five replacements: second row Richard East made way for Jordan Williams, centre Dan Robinson was replaced by Rhys Humphries, Aaron Quick came on for scrum half Rhys Dyer, the two props Jamie Jeune and Ryan Harford were replaced by Aaron Coundley and Ollie Drake respectively.

Then came the unwelcome incidents of cards being issued - firstly, in the 65th minute Pooler drove Dunvant back at a scrum in the home 22. As the scrum stopped both blind side flankers, Dunvant’s Jamie Nicholas and Callum Davies of Pontypool started to fight and both ended up in the sin bin to cool off. Two minutes later Pooler scored the final try of the game when Clayton Gullis took play into the home 22 and passed to Kieran Meek who then offloaded to Marc Thorley and the wing scored an unconverted try in the corner (34-10). As soon as the try was scored fighting broke out in three different places. It took a while for the players to calm down and then the referee, Mr Kelvin Shorte, issued red cards to Dunvant prop Ryan Shoemark and Pooler’s skipper-for-the-day Rob Nash. The home side threw everything into attack in the closing stages but Pooler’s defence held firm and there was no further scoring. Final score Dunvant 10 Pontypool 34.

With this hard-fought victory, Pontypool made it a club record 16 consecutive league wins and have a 14-point advantage over second-placed Narberth with Tata Steel a further two points behind the Pembrokeshire club with six league games remaining. Next Saturday Pontypool welcome Tata Steel to Pontypool Park for the next round of league matches, kick-off 2.30pm. The following Saturday Pooler made the trip west to Parc y Scarlets for a WRU National Cup clash with Premiership side Llanelli. This match will be live on S4C with a 2.45pm kick-off.