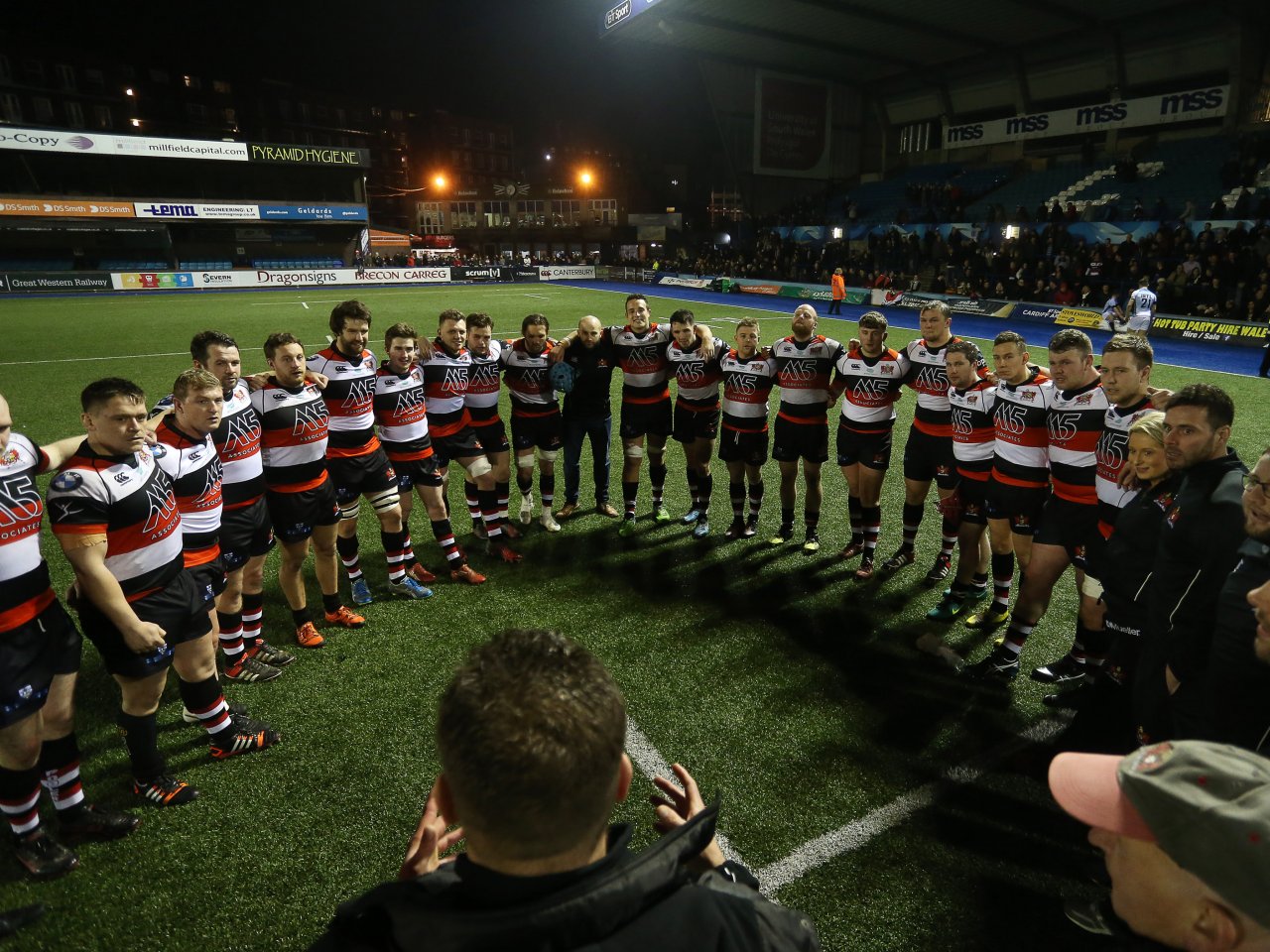 Pontypool’s remarkable winning run has now been extended to 19 matches in all competitions after an outstanding display at the BT Sport Cardiff Arms Park to put Premiership side Cardiff out of the WRU National Cup, writes Ray Ruddick.

In the first round, Pooler had impressed in defeating another Premiership club, Llanelli at Parc y Scarlets but the performance against Cardiff was even better. It was a cracking game and a good advert for cup rugby with both sides keen to put width on the ball as well as the intense battle up front.

Cardiff kicked off playing towards the clubhouse end of the ground on a dry and mild evening. In the first minute Pooler were guilty of going over the top at a ruck 25 metres from their line in midfield and home outside half Gareth Thompson slotted the goal to put the home team into an early lead (0-3). After 13 minutes Cardiff kicked ahead down the left flank and Pontypool were penalised for pulling back an opponent 25 metres out, 10 metres in from touch and Gareth Thompson doubled his side’s advantage (0-6). Four minutes later Pooler’s centre Sione Tu'ipulotu intercepted a pass on the half way line. He immediately offloaded to Nathan Brooks and the right wing sprinted 50 metres to touch down under the posts. Outside half Matthew Jones kicked the easy conversion (7-6).

Just after the mid-way point of the first half, Cardiff were penalised for taking out a player in the air at a lineout on their 22 on Pooler’s right and Matthew Jones increased Pooler’s lead with a successful kick at goal (10-6). After 25 minutes Cardiff were on the attack and Gareth Thompson managed to break the Pooler defence and crossed for a try near the posts which he converted to put the Blue and Blacks back into the lead (10-13).

On the half-hour mark Pontypool were penalised at a ruck 5 metres in from Cardiff’s right touchline, 30 metres from Pooler’s goal line and Gareth Thompson slotted a good goal (10-16). In the 36th minute Pontypool centre Dan Robinson took a knock and left the field. He was replaced by Clayton Gullis. Three minutes later the visitors had a scrum on Cardiff’s 22 on Pooler’s right. The ball went left and a superb backs move put left wing Josh Hurley in the clear and he crossed for a try near the corner. Matthew Jones kicked a fine conversion (17-16). In the 7th minute of injury time at the end of the first period, Pooler were penalised for a high tackle 30 metres from their goal line in front of the posts and Gareth Thompson kicked the goal to give the home side a slender two-point advantage at the break. Half time score Cardiff 19 Pontypool 17.

In the fifth minute of the second period, Pooler won a lineout on their left on Cardiff’s 22 and another fantastic move by Pontypool’s backs released Clayton Gullis who crossed for a try near the posts. Matthew Jones added the extras (24-19). Eight minutes later the Blue and Blacks were penalised at a ruck 10 metres from their line near the posts after the visitors put pressure on the home defence and Matthew Jones kicked the goal (27-19). On 55 minutes Pontypool were penalised at a ruck in midfield 30 metres from their line and Gareth Thompson reduced the arrears with another successful shot at goal (27-22). Just over an hour had been played when Pooler were caught offside on their 22 to the right of the posts and once again Gareth Thompson was on target with his sixth penalty goal (27-25). Visiting captain Ben Parry injured a leg and hobbled off the field and he was replaced by Alex Watkins.

In the 70th minute Pooler were on the attack and looked threatening. After some good inter-passing, flanker Rob Nash crossed for a try in the right corner and Matthew Jones slotted a good conversion (34-25). Sione Tu’ipulotu was then replaced by Tom Hancock in Pooler’s midfield. Shortly after, Cardiff’s replacement Jonathan Edwards was sin-binned for an offence at a ruck on Cardiff’s 22, 17 metres in from touch on Pooler’s right and Matthew Jones extended Pooler’s lead with another penalty goal (37-25). With around 5 minutes plus injury time remaining, Pontypool second row Gareth Rusby-Davies took a knock and was replaced by Ben Egan and then scrum half Aaron Quick made way for Rhys Dyer.

Just before the game headed into time added on for stoppages, Pontypool had a scrum near Cardiff’'s 10-metre line, 20 metres in on Pooler’s right and the home pack were penalised for standing up after the Pooler eight put in a powerful drive and Matthew Jones kicked the goal (40-25). Pontypool then made several changes with loose head prop Aaron Coundley replaced by Jamie Jeune, tight head prop Ollie Drake making way for Ryan Harford and Callum Davies came on for flanker Jordan Williams. Deep into injury time Cardiff scored a consolation try through hooker Ethan Lewis, converted by Gareth Thompson. However, Pooler had the final say when Cardiff, who were under the cosh near their posts, were penalised and Matthew Jones completed the scoring with his fifth penalty goal of the match. Final score Cardiff 32 Pontypool 43.

22-year-old Gareth Thompson was the shining light in the Cardiff side and caused Pontypool problems all evening. As well as contributing 27 of Cardiff’s 32 points, he was very dangerous and elusive in attack.

In a thoroughly entertaining and compelling game, the lead changed hands no fewer than six times. This was a terrific performance by the whole of the Pontypool squad and everyone concerned must be justifiably proud, much to the delight of the large and vocal Pooler support. It is the first time ever that Pontypool have scored more than 40 points at Cardiff Arms Park. The other clubs through to the quarter-finals are: Carmarthen Quins, Cross Keys, Ebbw Vale, Llandovery, Merthyr, Pontypridd and RGC 1404.