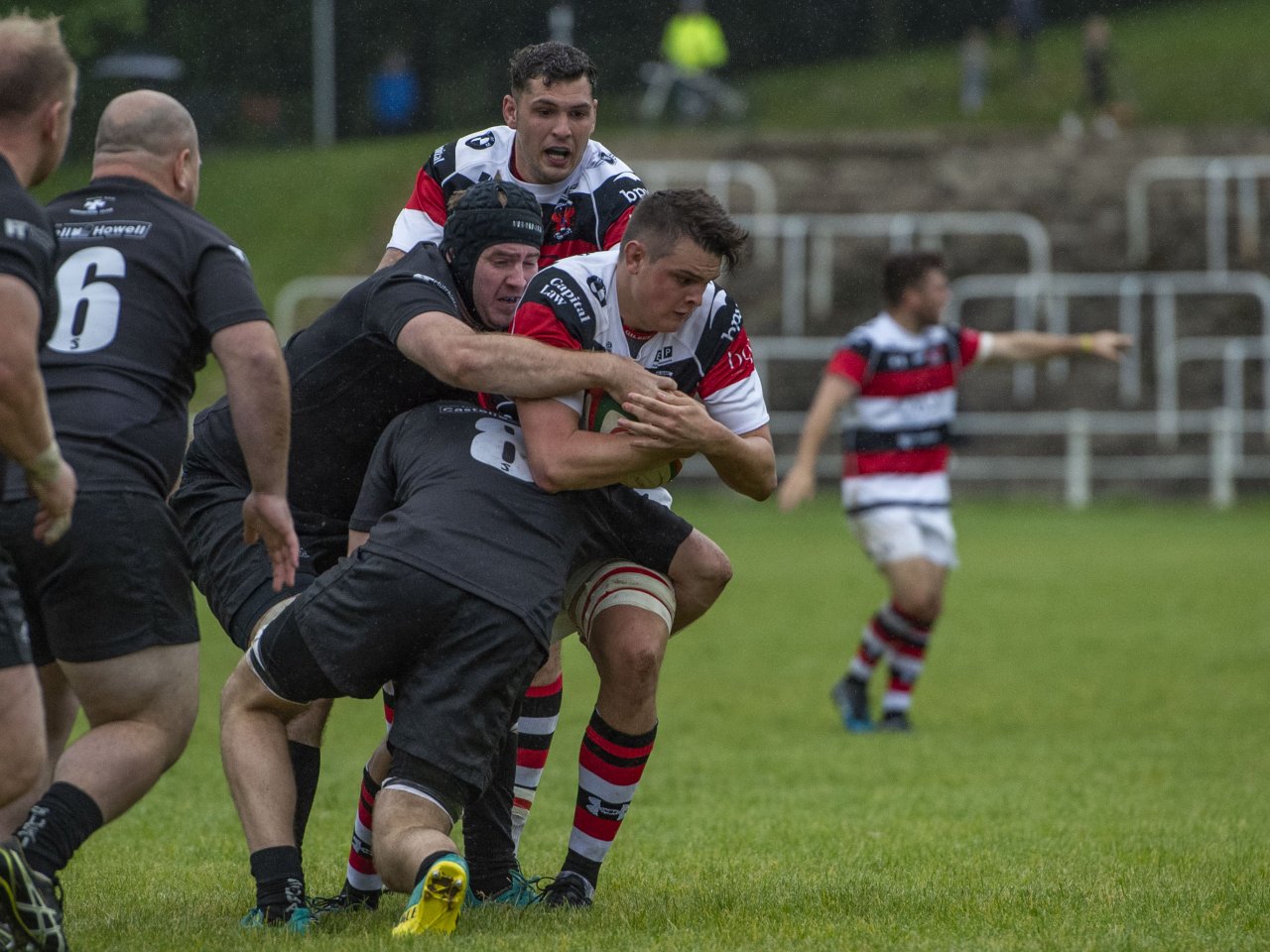 After narrowly going out of the Specsavers WRU National Cup at the hands of Premiership high-flyers Carmarthen Quins last Saturday, Pontypool returned to league action on Friday evening when they welcomed third placed Bedwas to a rain soaked and wind swept Pontypool Park, writes Ray Ruddick. This was a re-arranged match as the original game was scheduled for 9 November but both clubs were in Cup action that day. As expected it was a closely fought contest in awful conditions but Pooler managed to hang on to deservedly record their 63rd consecutive WRU National Championship victory.

Pontypool kicked off attacking the scoreboard end of the ground. There was very little to choose between the two teams in the first half an hour. Pooler enjoyed the lion’s share of territory and possession, playing with the elements, but could not put points on the board. Then on the half hour mark home second row Curtis Gregory was sin binned for an offence at a maul on Bedwas’ 10-metre line on their right. Eight minutes later the visitors also saw yellow when left wing Jordan Rees was guilty of a high tackle just outside the visitors’ 22, 15 metres in from Pooler’s right touchline. From the resulting penalty, up stepped outside half Richard Powell and slotted his shot at goal, to break the deadlock just before the interval (3-0). In the third minute of injury time, Bedwas were again penalised for a high tackle, 35 metres from their goal line, in midfield. This time, however, Powell’s attempt at goal went wide. It was a frustrating half for both sides as neither could find any rhythm in the difficult conditions. Half time score – Pontypool 3 Bedwas 0.

In the 48th minute Pooler made their first change when scrum half Aaron Quick was replaced by Owain Leonard. Seven minutes later Pooler were on the attack inside Bedwas’ 22, testing their visitors’ defence. The ball eventually went left and number eight Ieuan Jones manged to squeeze over in the corner for an unconverted try (8-0). Then around the hour mark Pooler made three changes in quick succession. Firstly Rhys Clarke made way for Ben Sparks in the second row, closely followed by Scott Evans replacing tight head prop Craig Price, who was making his 50th league and WRU Cup appearance for Pontypool. Finally Amosa Nove came on for Jordan Thomas on the left wing.

Pooler were on the attack but conceded two penalties in quick succession which turned attack into defence. Bedwas took advantage of Pontypool’s ill-discipline, when in the 66th minute, scored a try under the posts by flanker Owen Jones. Full back James Hallett slotted the conversion to bring Bedwas to within one point of their hosts (8-7). In the 74th minute Sam Cochrane replaced Aaron Coundley at loose head prop for the home side. A minute later Pontypool full back Geraint Walsh put in an up-and-under in midfield. Bedwas knocked on and the ball was gathered by Amosa Nove who sprinted 40 metres to score a try near the posts. Richard Powell added the extras (15-7).

Then approaching the end of the game Pooler hooker Lewis Ball took a very heavy knock and was attended to for some time before, thankfully, walking off the field, looking a little groggy. He was replaced by the returning Craig Price. After this lengthy period of inactivity, which unsettled Pooler, Bedwas managed to take a losing bonus point from the game with an unconverted try by Jordan Rees wide out on the left. Final score – Pontypool 15 Bedwas 12.

Pontypool did well to get a positive result against a tough and tenacious Bedwas outfit. This was a vitally important win for Pooler in their pursuit for promotion to the Premiership at the end of the season. The weather spoilt it as a spectacle but credit to both sides for their efforts in trying playing conditions. There is no match next Saturday for Pontypool due to the Six Nations but they are back in action on Saturday 15 February when they will travel to Trebanos Park. The next home game will be on Saturday 29 February when Ystrad Rhondda will be the welcome visitors to Pontypool Park. Both games kick-off at 2.30pm.